It’s hard to choose what group is the “worst” enemy of smokers. They all play their parts in our discrimination.

There’s a complex set of mutually-reinforcing influences at work. I wonder if it’s possible to sketch out a sort of flow chart of the system.

Historically, it all seems to have started with someone doing some research (usually in Nazi Germany, for example, Fritz Lickint, Franz Mueller, and others) . These studies led to the post-war studies by Doll and Hill,  Wynder and Graham, and others, which kicked off the smoking scare in the West.

These studies, carried out by doctors (Richard Doll was a medical doctor, and so were Ernst Wynder and Evarts Graham) in 1950 were widely disseminated  in the mainstream media to the ordinary people who made up their readers and listeners and viewers.

The mainstream media also exerted influence on government, and under pressure from them and from senior doctors and fake charities like ASH and CRUK, the government began to enact legislation, banning smoking in increasing numbers of public places

In the UK, government was initially rather unwilling to enact legislation to restrict smoking, and it was only in about 1970 (20 years after the research findings were published) that the first smoking bans were introduced (on trains). The hesitancy of government probably grew out of the fact that back then many people were smokers, and government feared a voter backlash. It was only when smokers became a dwindling minority that government felt able to enact harsher laws and impose higher taxes on tobacco. 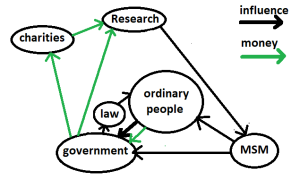 But there’s more that can be added to this flow chart. There’s also a flow of money in this system. The research (by Doll and Hill, and Wynder and Graham) had to be funded. And this funding came either from charitable foundations (Rockefeller, Ford, Robert Woods Johnson) or from government. And of course there’s the primary flow of money in the form of taxes paid by ordinary people to government.

And there’s also now a flow of money from government to fake charities like ASH and CRUK, which pretend to be funded by public donations, but which are in fact largely government funded.

In this larger flow chart, a feedback loop is emerging. Research → MSM → government → research. Research is picked up and amplified and broadcast by the MSM, and this prompts the government to fund yet more research. In each iteration of this cycle, laws get tougher, and taxes get higher. The principal winners are the fake charities and the researchers (usually in universities). And of course the government extracts more taxes from smokers.

Exactly the same happens with the climate scare. Once again, research is done, and the results are amplified and broadcast by the MSM, prompting government to spend yet more money on climate research. In each iteration environmental regulations are tightened, and taxes increased.

In both the cases of tobacco and climate, the feedback loops act to drive a mounting panic.

So where’s the political Right wing? It’s increasingly to be found among the ordinary people who are being bullied and regulated and robbed.

One thing that might also be said is that most of the ‘research’ that is being done isn’t genuine, disinterested, scientific research. It’s almost always ‘research’ where the conclusions are decided first, and then the ‘research’ is done to generate the predetermined conclusions. For, if it was not thus from the outset, the aim of the research becomes solely that of whatever can be used to drive mounting panic, and guarantee more government funding for further ‘research’.

I think I might carry on with this tomorrow. In the meantime, readers are welcome to make suggestions for what else needs to be added into the flow charts.

5 Responses to Constructing Flow Charts of Influence and Money