I’ve spent all year thinking about ice and ice ages. And so when I woke this morning to find that there was frost on the ground outside, I examined it with unusual interest.

My explanation for why the frost had settled on the grass was that the grass forms an insulating carpet through which heat doesn’t flow easily, and so even if the ground beneath the grass was quite warm, the insulating grass would prevent the frost from melting. But the tarmac roads and paths were not good insulators, and conducted heat more easily from the ground to the frost, and melted it.

I offered a similar explanation for the absence of frost on the car hoods. Cars are made of highly conductive steel, and this steel would readily conduct heat to any frost on its surface.

But what about the glass? Glass is not as conductive as steel, but it’s not a good insulator either. It probably has a similar conductivity as tarmac or stone. So why had the frost melted on the tarmac, but not on the glass windscreens of the cars? 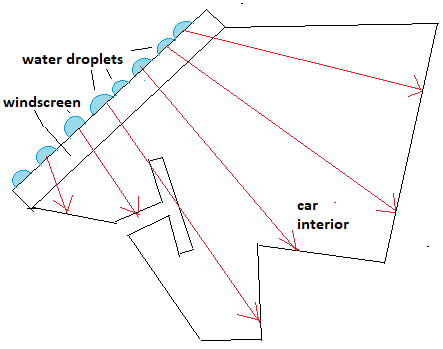 But then I thought that the windscreen is transparent, and droplets of water on the surface of the windscreen would have radiated heat through the windscreen into the interior of the car. And during the night the metal cars would have got very cold. They were probably colder than anything else, because their metal bodies conducted heat quickly away. And this may be why cars are like iceboxes in winter, and ovens in summer.

If this was the true explanation for the presence of frost on the car windscreens then I wondered if one way of preventing frost forming on windscreens might be to put a layer of reflective kitchen foil on the inside of the windscreen. This foil would act to reflect radiated heat from the water droplets back onto them, preventing them from cooling and freezing.

I should be able to find out, simply by taping a sheet of kitchen foil onto the inside of my car windscreen the night before a sharp frost. Maybe even a piece of white reflective card would do. If it works, the car windscreen should be covered in frost, except above the area of foil. But I’ll have to get up early in the morning to see it, because the sun usually melts any frost fairly quickly.

And if it doesn’t work, it’s back to the drawing board to try to find another explanation for why frost forms on car windscreens but not on their roofs.

It reminds me that, back in the 1950s, when I often slept in an unheated bedroom, the windows would often be covered in frost in the morning, perhaps because it was almost as cold inside as it was outside. But since I’ve been living in warmer houses, I seldom have seen such frost forming on windows.

smoker
View all posts by Frank Davis →
This entry was posted in Uncategorized and tagged oddity. Bookmark the permalink.