I can’t think about smoking bans all the time. And this morning’s thought was: we’re going to defeat these people. We’re going to destroy Tobacco Control. And actually it’s inevitable that we will.

I’m interested in lots of other things besides smoking and smoking bans. In fact I’m interested in absolutely everything. And my current interest is in ice ages. Because I had a very simple idea about the glaciations during which several kilometres of ice lies on top of the Earth.

And the simple idea was that ice sheets act as layers of insulation on the Earth, and this insulation warms the surface of the Earth. At right, there’s a block of rock which has a temperature of 200ºK at the top where it meets the atmosphere, and 500ºK at the bottom deep inside the hot Earth, and a temperature gradient from top to bottom. Now add a layer of ice of equal depth on top, and if the thermal conductivity of ice is taken to be the same as that of rock, the temperature gradient through them will also be from 200ºK at the top to 500ºK at the bottom, and the temperature where the ice meets the rock will be 350ºK. But the melting point of ice is 273ºK. So the ice will melt. And maybe all the ice will melt. And when it’s all melted, the surface of the rock will drop back from 350ºK to 200ºK. Whereupon any snow that falls on it will not melt, and it’ll build up to form a new block of ice. And that’s my theory of how ice ages happen, and why the ice sheets first grow, and then melt away, over and over again.

Over the past couple of months I’ve been slowly putting together a computer simulation model of the process, which calculates all the heat flows over tens of thousands of years, that shows how the cycle works. About a month back I reported on my progress. And fairly soon I hope to report some more (unless I get interrupted like I did last week with a mini ice age here in the UK).

The theory suggests that the rock beneath ice sheets can get very hot. And that also suggests that there ought to be residual “hot spots” where ice sheets used to be during the last glaciation, which ended about 12,000 years ago. And evidence of this heating might be found in hot springs that flow out of the earth. If I’m right, there ought to be hot springs all over Canada and much of northern Europe and Russia. So I’m thinking I might try to compile a map of hot springs all over the world.

I found one for the USA: 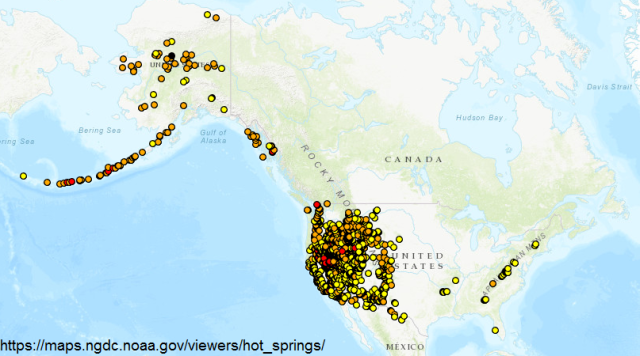 Most of the hot springs in the USA seem to be in the area of the Rocky Mountains. And in fact mountains ought to have the same heating effect as ice sheets on the the rock beneath them: they also provide an extra layer of insulation. The eastern hot springs are under the long thin Appalachian mountain range.

In the UK, there are a couple of hot spots. One in the Peak District in Derbyshire, and the other in Avon.

And, oddly enough, I used to live in the district of Hotwells in Bristol in the county of Avon, right on top of a hot spring. I knew of its existence, but never saw it, because it had been closed for many years due to Health and Safety considerations (the spring had become tainted)

The nearby town of Bath also has a famous hot spring, which the Romans built a hot bath on top of. It’s still there, and still full of hot water. But once again Health and Safety have closed it.

Another interesting thing about some hot springs is that several of them seem to have supervolcanoes under them. There are hot springs in Yellowstone Park in the USA, and there’s a supervolcano too. Same with Baden in Germany. And also in Italy, south of Rome.

And it occurred to me that, if ice sheets heat up the rock beneath them, they might also act to actually heat up the rock so much that it melts. Or at least raise the melt line of the rocks in the region underneath the ice sheet. And this was maybe what the “supervolcano” was: a raised area of molten rock.

There would of course be hot springs and volcanoes associated not only with ice sheets and mountain ranges, but also with cracks in the continental plates covering the globe. And that’s where most of the world’s volcanoes are found. And volcanoes like Vesuvius and Etna in Italy seem to be associated with faults in the Mediterranean plate.

I also once lived in Tunbridge Wells, in Kent. And the town only came into existence because of the iron-rich water from the Chalybeate spring. I’ve no idea what the exact temperature of the water is: in the link above it’s simply said to be “cool”. And “cool” may be somewhere between “cold” and “hot”. But I imagine that for every hot spring, there are lots of warm springs and cool springs as well as cold springs.

I’ve found a free e-book: Thermal Springs of the United States and Other Countries: A Summary.

smoker
View all posts by Frank Davis →
This entry was posted in Uncategorized and tagged Ice Age. Bookmark the permalink.

7 Responses to Hot Springs and Supervolcanoes