I got quite a strong response from the climate (sceptic) community for my Theory Of Ice Ages. Tallbloke reblogged my post on his blog.

But quite a few people were having trouble getting their heads round the idea of a system that oscillated between ice ages and interglacials. Like Peter Carter:

Are you telling me that if I half fill a polystyrene vessel with concrete, say, with a thermostatically controlled heating element embedded in it (the thermostat monitoring the element’s temperature to simulate the earth’s core being at a constant temperature), and then put a layer of water on top of it and stick it in a (thermostatically regulated?) freezer, I will see the ice periodically thawing out and then freezing? My gut expectation is that it would just reach an equilibrium, between ice thawed and frozen depending on the heating element temperature. What is the ‘magic’ that makes it oscillate?

Peter was trying to build a model, so that he could see how it might work. And I thought it was far too complicated. Something simpler and cheaper than that was needed.

Of course I’ve got my own model. It’s a computer simulation model in which I calculate heat flows through the Earth (and any ice on top of it) into the atmosphere. I wrote it myself a few weeks ago. I’m always constructing little dinky models of one thing or other that interests me. It’s almost a compulsion.

Maybe, when I’ve got it working a bit better, I’ll just publish the code, and allow people to run it themselves, and improve it or criticise it or refute it.

But it occurred to me late last night that there’s another way to build a heat flow model of ice ages, and it’s the way that people were doing it 40 years ago: build an electrical analogue model.

So I’m going to explain how this could be done with a few resistors and capacitors and a voltmeter.

Right. That’s the theory. Now the practice. To build a simple heat flow model of the Earth you need a circuit board with a long chain of resistors with capacitors between the resistors.

Lastly, there will need to be a diode placed across the resistors that represent the ice. And the diode would need to be biased so that it only conducts when the voltage at it is whatever the voltage that represents 273ºK, the melting point of ice. So if the core of the Earth is at 10 V, and outer space is at ground, 273ºK would be represented by 2.73 V. And the idea behind this diode is that while the temperature of the ice is below 273ºK, current would flow through the resistor representing the ice, and when it was above 273ºK the current would flow through the diode, shorting out the resistors representing the ice. And this would simulate the presence of ice below 273ºK, and its absence above 273ºK.

When the model is run, and a 10V power supply or battery is connected, what should happen is that as the voltage at the ice rises slowly to 2.73V, the diode should short out the ice resistor, ‘melting’ the ice. And with one resistor in the chain now absent, the voltage at the surface of the ‘Earth’ should fall, and the current flow through it should increase. And when the voltage at the surface of the Earth falls back below 2.73V, the diode should cease conducting, and the ice resistor should become active again – at which point the current flow through the surface of the Earth should fall, and its voltage start to rise again. In this manner an oscillating system of ice ages alternating with interglacials could be simulated. It would probably take a bit of trial and error to arrange for the ice resistor to be near 2.73V, for if the Earth is too hot, the ice will never appear. And if it’s too cold, it will never melt.

There are probably other ways of simulating the arrival and departure of ice. The diode idea is mine, and maybe it’s unworkable. But I’m sure that any electronic engineer (I’m not one) would be able to arrange something that works.

After that, the model could be elaborated in all sorts of ways. Solar heating could be added at various points using current pumps (in my time I’ve made about 10 of them). The warming or cooling of the Earth could be simulated by applying a varying voltage to its core. It might be possible to simulate the deposition of ice by having a series of small resistors which can be added to simulate layers of ice deposition. The atmosphere could be made into a complex system that included clouds. And so on. The possibilities are endless.

All that’s needed to get going is a few resistors and capacitors and a circuit board to plug them into. It would cost next to nothing, apart from the voltmeter.

There are quite a few things online about such analogue models. Here’s one.

And the hydraulic model of heat flow? I did actually see one working once. It was a contraption with lots of glass tubes filled with coloured water, something like this: 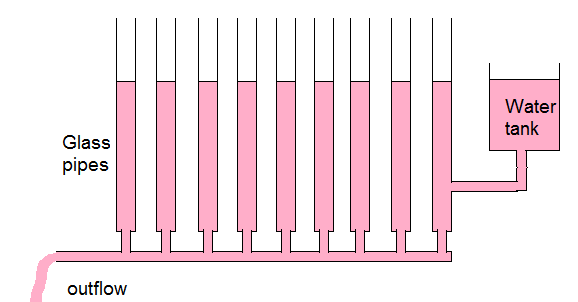 Heat flow rate was water flow rate. Water height represented temperature. And I seem to remember the pipe diameters represented thermal capacitance. When it was in operation, and water was flowing out of it, the level of the water in the pipes would change to show a gradient along the chain of pipes. I think water probably had to be added to maintain the level in the water tank.

But I only saw it working once. And I also remember that the floor of the laboratory ended up covered in water.

smoker
View all posts by Frank Davis →
This entry was posted in Uncategorized and tagged agw, Ice Age. Bookmark the permalink.

7 Responses to An Electrical Analogue Model of Ice Ages