One of the several topics of conversation in the Smoky Drinky Bar last night was mountaineering:

Cigarettes as an aid to climbing
Report, November 21 1922

Captain GJ Finch, who took part in the Mount Everest expedition, speaking at a meeting of the Royal Geographical Society, London, last evening on the equipment for high climbing, testified to the comfort of cigarette smoking at very high altitude. He said that he and two other members of the expedition camped at 25,000ft for over 26 hours and all that time they used no oxygen.

About half an hour after arrival he noticed in a very marked fashion that unless he kept his mind on the question of breathing, making it a voluntary process instead of an involuntary one, he suffered from lack of air. He had 30 cigarettes with him, and as a measure of desperation he lit one. After deeply inhaling the smoke he and his companions found they could take their mind off the question of breathing altogether … The effect of a cigarette lasted at least three hours, and when the supply of cigarettes was exhausted they had recourse to oxygen, which enabled them to have their first sleep at this great altitude.

So if you smoke cigarettes at high altitude, you can breathe easily. And if you don’t smoke you won’t breathe easily, and will need oxygen.

Since Mount Everest is 29,029 feet high, it’s only 4,000 feet higher than the 25,000 feet where the smoking mountaineers were camped. It seems likely that the beneficial effect of a cigarette wears off more quickly at higher altitude, and so very high altitude climbers would have to smoke cigarettes more frequently than one every 3 hours, In fact we may imagine one day witnessing chain-smoking mountaineers ascend to the summit of Everest, using no oxygen at all. And if smokers can do it without oxygen, they will have no need to carry heavy and bulky oxygen cylinders and masks, which will make it much easier for them to climb.

And what a catastrophe it would be for Tobacco Control if it could be demonstrated that far from impeding and damaging breathing, tobacco smoke improved breathing. And so I imagine that Tobacco Control will want to now make the upper slopes of Everest a smoke free zone, with No Smoking signs hammered into the snow every few yards, in order to prevent the possibility of anyone ever seeing chain-smoking smokers strolling up to the peak, passing oxygen-using non-smokers toiling slowly towards it (and very often dying, given that Everest is littered with dead bodies).

One problem that would need to be solved is the sleeping problem. But it really ought to be possible for smokers to smoke while asleep. So I’ve begun thinking about 8-hour night cigarettes which mountaineers would light shortly before falling asleep: 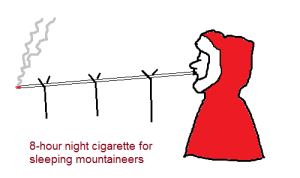 I imagine that the night cigarettes would be very long, and quite thick as well, and would be carried strapped on mountaineers’ backs like skis. And since the sleeping smoker would be unable to hold them in place, they would need special mouthpieces and supports at intervals along their length. The night cigarettes would also act as alarm clocks that would wake the sleeper when the burning tip reached the sleeper’s mouth. If someone only wanted brief naps, they could simply chop up an 8-hour night cigarette into 16 half-hour cigarettes, sure in the knowledge that they would definitely get woken up on time.

Another group of high-altitude smokers might be glider and hang-glider and hot air balloonists. The last group might consider using tobacco-powered hot air balloons, with the balloons full of tobacco smoke. Fine vertical control of these tobacco balloons might be obtained by the passengers lighting cigarettes to climb, and stubbing them out in order to descend.

Last and not least would be (tobacco-powered?) commercial aircraft flying at altitudes of 35,000 feet or more. In this case, it would probably be necessary to fill the interior of the planes with super-dense tobacco smoke to ensure that absolutely everybody (chiiiildren included) would get sufficient smoke all the time, allowing them to sleep if they wanted to.  These aircraft would have sophisticated tobacco burning devices that would constantly feed in fresh tobacco smoke into the planes’ ventilation systems (perhaps with a regular change in the type of tobacco being burned, from Golden Virginia to Balkan Sobranie), and with sophisticated electronic controls regulating the burn rate throughout the flight. The atmosphere inside these aircraft would be like that of a busy nightclub or party, and perhaps many passengers would regard them more as nightclubs than as means of transport.

One slight disadvantage of this might be that passengers walking around in the smoke-filled aircraft  (e.g. to the toilet) would tend to get lost. And passengers would usually be unable to see much out of the plane windows through the smoke either.

The only smoke-free zone on these aircraft would be the toilets, so that toilet users could see what they were doing. These toilets would probably be surrounded by green-faced antismokers trying to spend the entire flight in the toilets.

Another feature of these commercial aircraft would be that they would release smoke from their interiors as they descended, and so they would all land in a huge cloud of tobacco smoke as they “normalised” the atmosphere in the interior of the aircraft. One result of this would be that airports would also be very smoky places, in part because not only the arriving aircraft would emit smoke, but also disembarking passengers would be visibly exuding smoke from every surface of their clothes and hair for several hours (or days) afterwards. The only smoke-free places in the airports would be a few glass booths in which antismokers could congregate for a bit of fresh air.

The smoke-exuding passengers from these flights would also rapidly fill any bar or restaurant or hotel with smoke, without lighting a single cigarette or pipe or cigar. In this manner most bars and cafes and restaurants near airports would soon cease to be “smoke-free,” regardless of the number of No Smoking signs in them.

In this manner, smoking would be first re-introduced where it was first banned – commercial flights.

Last but not least a photo of cyclists lighting up on the Tour de France:

I’m not sure when this photo was taken, but the bikes look quite modern. Was it taken at the end of the race, or the start? Or was it that these cyclists smoked throughout the race, and what I thought were canisters of water on the handlebars are actually cartons of cigarettes? Or perhaps they only smoked in the mountainous high altitude regions of the tour?

smoker
View all posts by Frank Davis →
This entry was posted in Uncategorized and tagged Tobacco Control, tobacco+. Bookmark the permalink.