Usually when my eyes fall on one of the antismoking messages on “plain” packaging, they instantly recoil away in disgust. So I found it a little odd this morning when they settled on a new message – one I hadn’t seen before – sufficiently long to arouse real interest in it. 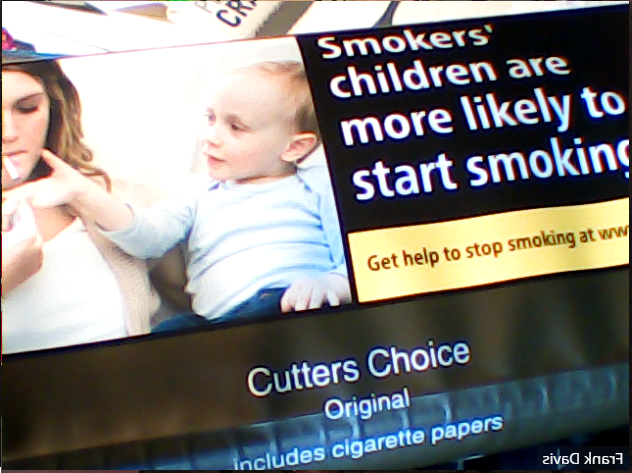 But then I realised that since antismoking zealots believe that smoking is itself a disease, and in fact an epidemic disease, “starting smoking” must seem to them like contracting pneumonia or dysentery or cholera: a truly terrible thing to happen to someone. I vaguely wondered if they felt the same about drinking tea or reading books.

In fact, of all the bad habits the adults had, reading seemed to me to be one of the very worst. For, after lunch, my grandfather would disappear behind a huge newspaper. And the purpose of this newspaper, it was quite clear to me, was to simply shut the whole world out of his sight, and allow him to fall asleep behind it. The newspaper was a curtain that he threw up around himself, held up by his two hands until they relaxed in sleep.

For I had ascertained that there was nothing of any interest in the newspaper. It wasn’t full of cartoons or pictures like my comics. There were hardly any advertisements in it either. There were just rows and rows of meaningless black symbols on its white paper. And these were clearly what sent my grandfather to sleep.

And it was with some considerable dismay, around that time, that I learned that my mother was planning to teach me to read. For it meant that she was planning to teach me how to fall asleep, just like my grandfather. And when she added that, after she had taught me how to read, she would also teach me how to write, I wondered what the point of that might be, except to know how to write shopping lists. Why couldn’t adults simply remember what they needed to buy? It was usually the same thing every day. Coffee. Sugar. Bread. Why did they have to write it all down simply so they could read it again later when they reached the shops? Did they also need to write down which shops they were to visit, and how to get there?

No. I had no interest in doing what adults did. In fact I looked forward with no little gloom at the prospect of one day sitting in an armchair, shrouded in newspaper, falling asleep. What sort of life was that?

Nor did I start smoking because my friends started smoking. They and I only ever smoked cigarettes in order to break school rules. If we had been encouraged to smoke at school, we would never have done so.

And neither my father or mother or grandfather ever encouraged me to start smoking.

No, I had no interest in smoking until, at age 17, I encountered the virulently antismoking Dr W. He was, for me, an entirely new species of being, one that I had never encountered before: someone who so passionately hated smoking that he would shout it out loud. It was like finding someone who passionately hated custard, or newspapers, or shopping lists. And in Dr W there was real hatred: and quite obviously irrational hatred. It was the shocking encounter with an antismoker like Dr W that started me smoking. And if his hatred had been directed at custard or newpapers, I feel sure that I would have started eating copious amounts of custard and interminably reading newpapers. For I was utterly determined that I was not going to be like Dr W. And if I was to not be like him, then I had to start smoking. And within months I’d bought myself my first packet of 10 cigarettes, and taken about three weeks to smoke them, one by one.

And so this morning I found myself entertaining the thought that it is antismokers who are the very best advertisements for smokers. All they have to do is to exhibit their hatred, and people will naturally recoil from them (just as I did), and start smoking.

And back then, the antismoking Dr W was a novelty. And now people like him are everywhere. The world is full of coughing, spluttering, hand-waving antismokers. And they are the very best ads for people to start smoking.

And it reminded me of the determined, young, freckle-faced woman who approached me in a pub garden a year or two ago, and asked if she could have one of my cigarettes. I rolled her not just one, but two. And she smoked them with great concentration as we sat together. What courage it must have taken her to approach a complete stranger. What planning it must have required. I now think that, like me, all the antismoking zealotry on display today must have made her absolutely determined to smoke.

In fact, I thought that the current antismoking campaign, with its shocking exclusion and demonisation of smokers, must be making a very great many young people as utterly determined to start smoking as I was after my encounter with Dr W. For the antismokers are their own worst enemies. There’s no need for tobacco companies to advertise their product: all they need do is let the antismokers do it for them, and breed a population of utterly determined smokers.

smoker
View all posts by Frank Davis →
This entry was posted in Uncategorized and tagged antismokers, packaging, psycho-antis. Bookmark the permalink.