The way I see it, there are 1,500 million smokers scattered all over the world. They make up about a quarter of the population of the world. But they’re largely powerless. And they’re powerless because they are disunited. If they can be brought together – or even if a few of them can be brought together – they’ll begin to form an army. And they’d begin to get their voices heard.

Everyone who visits it seems to like the Smoky Drinky Bar. It is very like a real pub. It’s just one in which people can smoke and drink and talk, which you can’t do in real pubs and bars. It’s only been going about a week, but it’s already attracted a small clientele of regulars. If it becomes a success, and becomes jam packed all day every day, people will start opening new ones.

It presented me with a dilemma. I think of the Smoky Drinky Bar as a place for excluded smokers to meet up. Why should I let non-smokers or ex-smokers or vapers into it? But ultimately I’m trying to build an army of opponents of smoking bans rather than of friends of tobacco. And since ex-smokers and non-smokers outnumber smokers 3 to 1 or more, I can build a much larger army if I admit ex-smokers and non-smokers. The only people that I must exclude are antismokers. And I’ve yet to encounter any of those. And I’m not sure that there are all that many of them anyway.

I decided to offer membership of the bar to both the ex-smoker and the non-smoker. What mattered most was that both of them hated the smoking ban. It didn’t really matter that they didn’t smoke. And both of them accepted my offer. And if there are a lot of smoking-ban-haters among the ranks of ex-smokers and non-smokers, the Smoky Drinky army is going to be huuuuge. 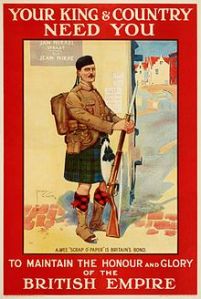 What that army will do is something that only needs to be thought about when we actually do have an army. And at the moment we don’t. And I see myself as simply being someone who is trying to enlist people into the army. Because I think that if you are to build an army, the first thing you must do is bring people together into one. Only when you have an army can you begin to think what you might do with it – or rather what it might do with itself. So I see myself as a recruiting officer in a bowler hat, sitting behind a  table in a recruiting office with posters on the wall (like the one at right).

In fact this morning I wasn’t seeing myself as either a Lenin fomenting revolution in Tsarist Russia, or as a Kitchener calling for recruits in WW1, but instead as a Captain Mainwaring trying to build a Dad’s Army. After all, most of the people coming into the Smoky Drinky Bar are pretty old. I am myself 69 years old. And some visitors are even older. Very likely it will be a sort of Dad’s Army which I will assemble, with one or two young Private Pikes in it. But I do not at present think that the army needs fit young men who can fire rifles and hurl hand grenades: the army needs hardened keyboard warriors. It needs armchair soldiers who can fight online wars from the comfort of their living rooms. Their war could be a quite hilarious war to fight.

And I was also thinking that I have a much better philosophy than Lenin ever had. Lenin had Marxism, but I have Idle Theory. And Idle Theory is a far more coherent idea than Marxism ever was. And the goal of Idle Theory is a world full of idle people, sitting and drinking and talking and smoking. My image of The Idle Man is a man lounging back on a seat, smoking:

Idle Theory is an almost perfect match with what most smokers and drinkers want: they want to be able to sit and talk and smoke and drink. That’s their idea of fun. It’s my idea of fun too.

It’s not a perfect match because Idle Theory is as cold and mathematical a way of thinking as the Newtonian mechanics in my orbital simulation models. In fact I see Idle Theory as (a proposal for) the extension of physics into economics and ethics.

I think it’s almost as important to have a coherent ideology or belief system as it is to have an army. For if one assembles an army, that army ought to have something it is fighting for, as well as fighting against. We know who we are fighting against: the satanic forces of Tobacco Control. Idle Theory offers an idea of what we are fighting for: an idle, playful world. I’ve been surprised in recent days at the numbers of my readers who are attracted to Idle Theory.