A month or so back, in Strange Journey I described an experiment that I’d conducted with my orbital simulation model, where I’d dropped a ball bearing on the surface of the rotating Earth, and watched it roll (or rather, bounce) westwards from the northern hemisphere to the southern hemisphere and back again, over and over again, solely under the influence of the gravitational attraction of the Earth, Moon, and Sun.

This gave me an idea for a novel global atmospheric circulation model. What if I dropped hundreds of balls or bubbles of air on the surface of the Earth, and let them roll over its surface, and bounce off each other when they collided? How would they behave? Would the air bubbles form circulation patterns like those in the Earth’s atmosphere? Might I be able to reproduce global warming?

So for the past month, on and off, I’ve been writing the code to get it all working.  I’ve treated the collisions between the air bubbles like the collisions between beachballs, which become compressed when they collide, and push each other apart elastically. At some point I intend to add friction forces between the bubbles and the surface of the Earth, and also features like mountain ranges for the bubbles to (try to) roll over. I’m also planning to have the Sun heat up the bubbles and make them swell and move faster, and then allow them to cool at night.

This isn’t how atmospheric and climate scientists construct their Global Circulation simulation models. What they do is to divide the surface of the Earth into layers of fixed cells, and calculate the flow of air and heat and so on from one cell to the next. That’s to say, they don’t have bubbles of air bouncing all over the surface of the Earth. But I can’t, at the moment, see what’s wrong with modelling the atmosphere using bubbles. Because, as best I understand it, the atmosphere actually does consist of masses of air moving around on the surface of the Earth, under the influence of gravity and sunlight and  friction. And these air masses do collide with each other, and block each other from moving.

In my prototype there are only 162 bubbles, with each bubble 100 km in diameter, but I’m hoping – if my poor old computer can manage – to increase the number of bubbles to something around 1000. If I had a supercomputer, I’d create many thousands of smaller bubbles, bouncing not only on the surface of the Earth, but also on top of each other. High pressure zones would have lots of bubbles packed closely together, and piled on top of each other, and low pressure zones would have fewer bubbles in them. With luck, I’d find that the bubbles moved in circles around these high and low pressure zones, like winds do. Who knows, I might even be able to replicate a few jet streams.

I started my model with the 162 bubbles dispersed evenly over the Earth, with each bubble having the same speed as the patch of earth beneath it. As expected, they all began to roll westward, and converge on the equator, where a large high pressure area developed, and the bubbles started bouncing off each other.

After that, the bubbles moved off in different directions, and dispersed over the surface of the Earth, and continued to collide with each other. The 2:45 minute long video below shows (a bit too briefly) the initial westward motion of the bubbles, as seen from geostationary MeteoSat 7 above the Indian ocean. Bubbles nearer MeteoSat 7 appear larger than those on the far side of the Earth. After they’ve been colliding with each other for a while, the bubbles are then shown moving in various different directions, but still occasionally colliding with each other (0:10 to 2:05).

And finally (2:06 to 2:40) some of them are shown flying the surface of the Earth, and disappearing into outer space.

The atmosphere boils off.

I’ve managed to get global warming on my very first attempt! Without adding any CO2. And after only 10 days in real time. 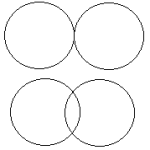 The reason this happens in this model is because it’s using an 8 second time step, and calculates the positions of the air bubbles every 8 seconds. This means that, when they collide, the bubbles will overlap each other quite a lot (below right), instead of just touching at their surfaces, like beachballs (above right). And since they’re closer together, the model assumes that the compression forces pushing them apart are stronger, and gives them both a higher acceleration apart, and a higher speed.

And I bet that something like this is happening  in the climate scientists’ Global Circulation Models. All simulation models are approximations. They all have small errors. My orbital simulation model has a small error: the planets are never exactly where they are supposed to be. If the error is 100 km after one year, the cumulative error after 10 years will be 1000 km, and after a century 10,000 km, and so on. Eventually the planets will be nowhere near where they should be. And the same applies to heat flow and air mass flow simulation models. They’ll all have slowly growing cumulative errors.

So I strongly suspect that global warming is an artefact of the simulation models. And if they started off predicting global cooling back in the 1970s, I suspect it was because the early GCMs tended to under-estimate heat flows in the atmosphere, and they saw cooling. Then, when they’d improved their models a bit, they saw warming, so now they’re predicting that. But I now think that whatever improvements they make in the future, they’ll always see either warming or cooling.

I’m very pleased that I’ve managed to produce my own GCM, which generates global warming at least a hundred times faster than the climate scientists’ GCMs. But at least I know why my model is generating global warming. It seems they still don’t know why theirs do.

smoker
View all posts by Frank Davis →
This entry was posted in Uncategorized and tagged agw, DA14. Bookmark the permalink.