Chris Snowdon has a good example of antismoking “science”. Below is shown a graph of heart attack mortality rates in Sao Paulo, Brazil, before and after the introduction of a city smoking ban: 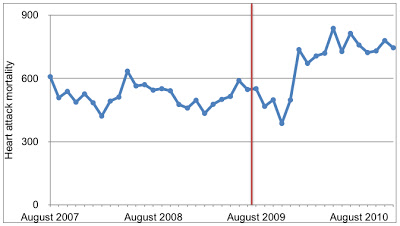 As is perfectly obvious, heart attack mortality rose shortly after the ban was introduced. But Tobacco Control reported it differently:

I’m beginning to think that the only thing that Tobacco Control is interested in is headlines. Clearly it doesn’t matter what the actual result of the smoking ban might have been. But if they can create headlines reporting that heart attacks reduced following the introduction of a smoking ban, they can create the perception that the smoking ban was a great success, and that therefore more such bans will have similar results elsewhere in the world. Screw the science: perception is everything.

If so, why even bother to do any “research”? If they only want to influence perceptions, why not just manufacture headlines? Perhaps they already do. But as they publish their falsehoods, they debase the publications that print them, in this case the British Medical Journal, and any other newspaper that carries the story. No wonder public trust in the mainstream media is in free fall.

Anyway, the conclusion that I draw from the above mortality graph is that, far from saving any lives, during 2010 Tobacco Control actually murdered about 200 people a month in Sao Paulo. That’s over two thousand people who may as well have been gunned down on its streets by antismoking DeAsh terrorists imported from Syria.

Smoking will be prohibited in public housing residences nationwide under a federal rule announced on Wednesday.

Officials with the Department of Housing and Urban Development said that the rule would take effect early next year, but that public housing agencies would have a year and a half to put smoke-free policies in place. The rule will affect more than 1.2 million households, the officials said, although some 200,000 homes already come under smoking bans adopted voluntarily by hundreds of public housing agencies around the country.

The nationwide ban will have its greatest impact in New York, where the New York City Housing Authority — whose 178,000 apartments and more than 400,000 residents make it the largest public housing agency in the United States, has lagged behind many of its counterparts in adopting smoke-free policies. While HUD proposed the sweeping prohibition a year ago, it had been prodding public housing authorities to adopt such policies since 2009.

Since this is a federal ban, incoming president Donald Trump may have something to say about it. Or conversely, he may not. Interesting early test.

I’m not sure how many residents in US public housing are smokers. I imagine quite a lot of them are. And since it’s the outgoing “progressive” Democratic US government that’s imposing this ban, I doubt if it will encourage them to vote Democrat at the next election. And since I’ve been arguing that smokers would generally have preferred Donald Trump to Hillary Clinton, perhaps they already last month didn’t vote Democrat? And the ban is a punishment imposed on them by a mean and spiteful outgoing administration? Who knows.

And who wants public housing anyway if a bullying Department of Housing can tell its residents they must stop smoking? Who wants a bullying National Health Service if it can be used to demand UK hospital patients quit smoking even in the open grounds surrounding the hospitals? What better argument can there be for private medicine, where the patients are valued customers?

smoker
View all posts by Frank Davis →
This entry was posted in Uncategorized and tagged smoking ban, Tobacco Control. Bookmark the permalink.