The Culture Of Place

The recent EU referendum in Britain, and the current US election, have set me thinking seriously about national identity. Why is it that people in one place so persistently regard themselves as in some way different  from geographically adjacent peoples?

I focused today on one single question: Why is there an England, a Scotland, and a Wales. Why isn’t it all just Britain? And I simplified the question to just this: Why is there a Wales?

Perhaps the terrain map below, which shows the Welsh border with England as a thick red line, may offer a very simple explanation:

The border follows almost exactly the line where the Welsh hills rise above the English lowlands to the east. Almost the entirety of Wales is hill country. In the north of Wales there are even mountains.

In what way does that mean that life in Wales was likely to have been different than life in England?  Well, for a start England’s gently rolling hills are covered in farms growing wheat and corn and barley and oats and potatoes and cabbages and turnips and any number of other plants. But there is very little such arable land on Welsh hills, and so the Welsh largely kept livestock: pigs, sheep, cattle. So probably the Welsh ate different foods than the English. And since Wales is bounded by a coastline on three sides, we might guess that they ate rather more marine fish than did the English.

And as most of England consists of gently rolling hills, it also meant that it was relatively easy to move around England. The Roman roads of England undoubtedly made it even easier. Not so in Wales. It takes much more effort to move around hill or mountain country. Agricultural and manufacturing products could be easily transported and traded throughout England. And so also could languages and customs and beliefs and ideas. So while English society was fluid and dynamic, relatively isolated Welsh communities were far more self-sufficient and resistant to change.

And so Wales retained (and still largely retains) its own Celtic language – the language that Britons probably spoke during the Roman occupation. The English language is really an amalgam of many languages, including Celtic and Latin and French and Danish. England is a melting pot in which languages and beliefs and ideas are always being blended, and probably very quickly blended, because England is not a large country. And English is, as a result, a highly portable language that is the product of rapid linguistic evolution over many centuries. 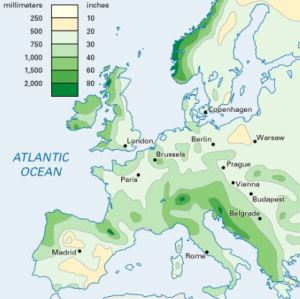 One might also imagine that people who live in hill country, and climb hills every day, are almost certainly stronger and hardier than lowlanders who walk on its plains, or ride horses and carriages across them. And since Wales has a higher level of rainfall than England, the Welsh might have been expected to spend more of their time indoors, and to have worn sturdier clothing.

All of the aforementioned differences between England and Wales are also the differences between Scotland and England. For Scotland is even more mountainous than Wales. And while the Romans succeeded in conquering Wales, they never succeeded in conquering Scotland. Neither did the Normans. And so Scotland has also retained its own language, unmixed with either Latin or French. And they also retained distinct clans in pockets all over Scotland, something reflected in the cantons of the even more mountainous Switzerland.

If the differences between the English and the Scots and the Welsh have greatly diminished over the past century or two, it’s probably because roads and railways and canals and bridges have made the movement of agricultural and manufacturing products – and also language and customs and beliefs – much easier between them. Most Welsh and Scots now speak English. And so do the Irish. In fact, a great many Europeans now speak English in addition to their native languages. English has become a global language, more or less in my own lifetime.

Dogged resistance is perhaps one of the principal cultural traits of the Welsh, the Scots, and the Irish. And easy accommodation is perhaps a principal cultural trait of the English. After all, the English readily accommodated first the Romans, and then the Danes, and then the Normans, in rapid succession. The others would not. And if I personally have mounted a bit of a spirited resistance to smoking bans, it may well be simply because I am descended from Welsh mariners, Scilly Isle lighthouse keepers, and the peat-burning Irish of the Bog of Allen – and such people always doggedly resist any yoke placed upon them.

The arguments I’ve raised in this essay have all been physical arguments. That some places are more hilly or mountainous than others. That some have more productive soils than others. That some are colder or wetter than others. My suggestion throughout has been that the land on which people live shapes the people who live on it. I’m even inclined to suggest that any foreigner who lives long enough in any country will become as much a native of that country as its true natives. And anyone who visits Paris or Venice or Barcelona just for one day becomes a citizen of those cities in some fractional degree.

The English are much more shaped by England than they have ever shaped it. They are surrounded today by the same hills and valleys as their ancestors. The same is not quite true of England’s towns and cities. London has been almost entirely built and rebuilt by Londoners, but Londoners are also formed and shaped by the London built by prior generations.

And since every land is different from every other, there will be different people living everywhere. And they will have different cultures, languages, clothes, foods, customs, and beliefs.

And these cultural differences are not trivial. They are the product, in most cases. of many centuries of gradual change. And there are often ineradicable differences: for example, Scotland will always be colder and more mountainous than England. And because there are so many different cultures around the world, no single one-size-fits-all European project or globalist New World Order will ever be able accommodate all of them, any more than one size shoe will fit all feet. People are not blank slates from which beliefs and values can be erased and over-written with new ones – because the culture inherent in the places they inhabit is already deeply etched into them. So there can be no such thing as a single set of “European values” or a single  species of “European citizen”: they are pipe-dreams, and any attempt to construct either will be bound to fail.

smoker
View all posts by Frank Davis →
This entry was posted in Uncategorized and tagged culture, Politics. Bookmark the permalink.

24 Responses to The Culture Of Place