A couple of people have mentioned the new “plain packs”. Maybe these are an example? 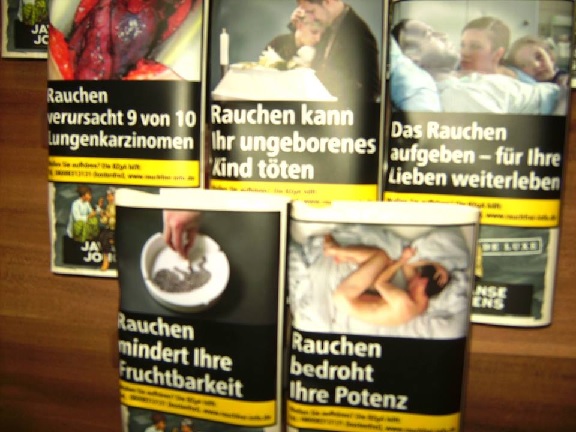 And they have the nerve to call it “plain packaging”? That’s really just another lie in a very long litany of lies. They’ve swept the manufacturer off his own product, and vomited up their own bile onto the blank space remaining. They’ve defaced it. I’m astonished that it’s legal to do that. But the law always seems to be whatever Tobacco Control want it to be.

I haven’t seen one yet. But when I do, I’m going to mail it to my MP, and suggest that he shows them to a few Labour MPs and ask them, “Is this what you wanted? Is this what you were expecting when you voted for plain packaging?”

It doubt if it will bother me too much. I keep my tobacco in a nice little tin with a picture of a Mad Hatter on it. I barely notice the existing packs.

It reminded me of something else I saw today from Christopher Monckton:

Dr. Roy Spencer of the University of Alabama at Huntsville annoyed the climate-extremist establishment a couple of years ago by describing them as “climate Nazis.”

Recently several of these creatures wrote a supposedly “learned” paper in an obscure journal, saying that anyone who, like Roy and me, raises legitimate questions about the magnitude of Man’s influence on climate or the disproportionate cost of making largely non-existent global warming go away, must be suffering from a psychiatric disorder.

These climate Nazis said that those who dare to question the Party Line on the weather should be regarded as suffering from “identity-protective cognition” and “conspiracist ideation.” I was among those they named.

In Communist Russia, before its defeat at the hands of the triumvirate of liberty – Ronald Reagan, Margaret Thatcher and Pope John Paul II – opponents of the regime whom the dictators had not executed were instead flung into psychiatric institutions, on the ludicrous ground that any opposition to the Party Line constituted culpable insanity.

Only one opinion is allowed. Anything else is shouted down. And “plain packaging” is shouty packaging, shouting the Party Line. It’s the tobacco manufacturer who’s being shouted down. Or the climate sceptic. Or anyone who disagrees about anything.

It also reminded me of something I read on Rush Limbaugh yesterday.

CALLER: Earlier this summer we had a Left Coast blue state relative visit the family, and she seemed to have a personal mission to suppress our votes in the upcoming election. She encouraged us all to sit this one out, not to vote at all. She also told my 18-year-old daughter, who will be a first-time voter, that she was too young to understand the issues and that she should sit it out as well.

If you’re not going to vote for Hillary, then you shouldn’t vote at all.

smoker
View all posts by Frank Davis →
This entry was posted in Uncategorized and tagged agw, packaging, Politics. Bookmark the permalink.

19 Responses to Shouting People Down