Still pondering Europe in the run-up to the EU referendum, I came across an interesting essay (my added italics):

The history of multinational ventures in Europe is not a good one. Over four hundred years, the Habsburg Empire was unable to cement a workable enterprise. It only held together in the nineteenth century by striking bargains between the various national groups and by keeping them all, in the words of one Austrian prime minister, ‘in a condition of even and well-modulated discontent’. It is the same in the European Union today. The European Council brokers between national governments. ‘European policy’ is not European at all, but an amalgam and compromise between contending national policies.

The Habsburg Empire was not alone in being divided by local identities. Before Bismarck, the German lands were split between states with their own different political complexions, religious affiliations and regional allegiances. They were successfully brought together after 1870 because a larger pan-German sense of belonging had taken root, having been actively promoted in literature, folklore collections, and high scholarship. In the German lands, poets, historians and lexicographers made political union possible.

France went down a different route in the nineteenth century. At its start, less than a half of France’s population spoke the French language. The Marseillaise, sung in 1792 by volunteers from the Provençal south, was incomprehensible to most Parisians. Over the course of the century, the French state made a nation of Frenchmen—coercing a sense of national belonging and a single language through the schoolroom, bureaucracy and army. A similar pattern of cultural impressment took place in nineteenth-century Bohemia. Peasants from Moravia and Austrian Silesia were made into Czechs.

A political union will only prosper if its peoples feel some sense of common belonging that makes them willing to make sacrifices for one another.

In 1800, less than a half of France’s population spoke the French language? I knew that there were several fringe languages, but I thought that the French had all been speaking French for ages. Not so. I dug up an historical map of French languages:

“Oïl” is the French oui.

I suspect that nations are largely defined by their languages. A language is a shared possession, perhaps much more than the land itself. And it’s easier to get along with – and do business with – someone who speaks your own language; much harder with someone who doesn’t. So it’s easy for the English to get along with Americans, Canadians, Australians, and New Zealanders in the Anglosphere, because regardless of all other differences they at least all speak the same language.

If there’s resistance in Britain to immigration, it’s probably largely because the immigrants very often can’t speak English, and this creates an impediment. If they all arrived speaking impeccable English, they’d probably be welcomed as brothers and sisters. And I suspect the same is true elsewhere in Europe (with English replaced by whatever national language applies).

And English seems to have recently become the principal language of international discourse – which used to be French. I’m not sure why this is, but it probably firstly reflects the fact that English was spoken throughout the extensive British empire, and secondly it is also the principal language of the USA. I sometimes wonder if there has been a further push given by the fact that most computer languages (Basic, Fortran, Java, etc) are based upon English ( e.g. If… Then.. Else… statements) and anyone learning them is in effect learning a little English.

When I worked in the 1980s in France for a French company with branches in several different European countries, the “company language” was English, and everyone spoke English, even though we were on the outskirts of Paris. And when I spent a lot of time in Spain, I was speaking English 99% of the time, because mi amiga spoke perfect English.

I sometimes wonder what any future “world language” might be. If the present ubiquity of English is a consequence of the political power first of Britain and now of America, then the eclipse of that power might well see the rise of another language – like Mandarin Chinese.

And I sometimes wonder what language they speak at G8 conferences. You sometimes see Angela Merkel and Francois Hollande talking with David Cameron, but never hear what they’re saying. Do they speak in English? Or French? Or German? Or do they all have interpreters standing in the background? Or are they just pretending to talk?

Anyway, here’s part of the postal ballot that British voters have been given, which very 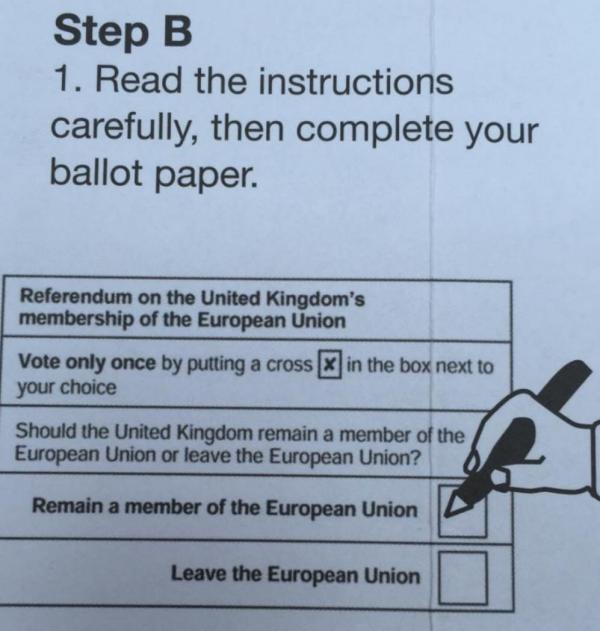 helpfully shows them where to place their cross.