Following on from the last post, I’ve managed to find out a bit more about this 70% thing, thanks to Rose and Fredrick Eich. 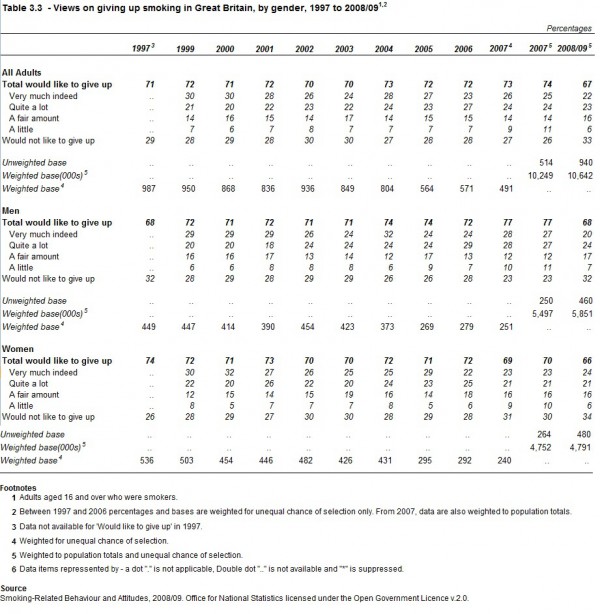 It’s always around 70% of smokers who would “like to give up”. Same in the USA:

But when I asked the question on this blog last night, here’s the response I got:

97% of my smoking readers currently didn’t want to stop smoking.

How weird!! Complete opposite of the other polls!

One poll had the rather disarming question: “All things considered, would you like to give up smoking, or not?”

“All things considered”? Like Life, the Universe, and Everything? In the majestic sweep of history, when it all comes down to dust, does what you personally might like matter one single damn? No, of course it doesn’t.

Perhaps I should have asked: “All things considered, would you really mind at all if you woke up one morning and found that you didn’t immediately reach for a cigarette, but instead just gazed peacefully out of the window with a serene smile playing on your face?”

Who could resist that? I reckon I could have got 90% No responses with a question like that.

And then I could tell the world that 90% of smokers are desperate to quit.

Meanwhile, I’m wondering if I went round a golf course, and asked golfers there whether they’d like to quit playing golf, 70% of them would reply something like: “Hell yes! Particularly if you’ve just shot 120, and lost 5 balls in the big pond on the fifth, and pulled a muscle in your shoulder – like I just have. Who needs this sort of suffering?”

smoker
View all posts by the archivist →
This entry was posted in Uncategorized and tagged cessation. Bookmark the permalink.

18 Responses to All Things Considered