Earth is Cooling, Not Warming

Something like this was bound to happen sooner or later: Russian military jet shot down by Turkey. 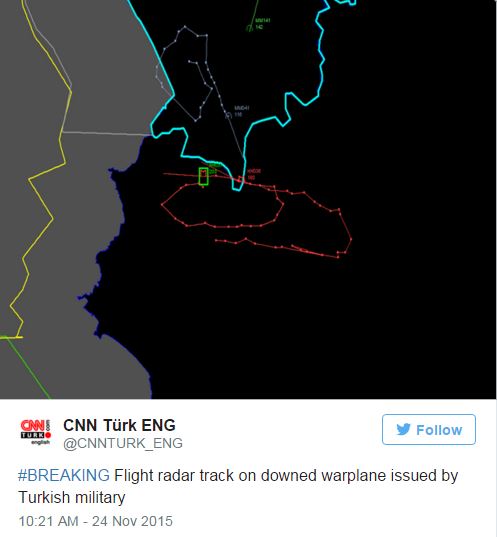 The finger of territory over which the Russian jet reportedly flew is about 2 km wide, and at the Su-24’s top speed of 1,315 kph it would have taken 5.5 seconds to fly over. It’s still only 11 seconds at half that speed.

If the yellow dots are of the Turkish F-16 that launched an air-to-air missile, then it was at least 10 km away. US air-to-air missile speeds are typically Mach 4, or 1.361 kps, and so would have taken 13 seconds to reach the Su-24.

To me, it seems really stupid  and completely unnecessary to shoot down a plane which spends 10 seconds or less over your airspace.

Diplomats present at the meeting told Reuters that while none of the 28 NATO envoys defended Russia’s actions, many expressed concern that Turkey did not escort the Russian warplane out of its airspace.

“There are other ways of dealing with these kinds of incidents,” said one diplomat who declined to be named.

the Russian Ministry of Defense explained, going forward, any Turkish plane that enters Syrian airspace will be fair game.

Via James Delingpole and NoTricksZone,

Veteran journalist Günter Ederer* writes a piece reporting that massive alterations have been found in the NASA GISS temperature data series, citing a comprehensive analysis conducted by a leading German scientist. These results are now available to the public.

Ewert painstakingly examined and tabulated the reams of archived data from 1153 stations that go back to 1881 – which NASA has publicly available – data that the UN IPCC uses to base its conclusion that man is heating the Earth’s atmosphere through the burning of fossil fuels. According to Ederer, what Professor Ewert found is “unbelievable”:

“From the publicly available data, Ewert made an unbelievable discovery: Between the years 2010 and 2012 the data measured since 1881 were altered so that they showed a significant warming, especially after 1950. […] A comparison of the data from 2010 with the data of 2012 shows that NASA-GISS had altered its own datasets so that especially after WWII a clear warming appears – although it never existed.”

I knew that the weather data was being massaged by James Hansen and company, but it seems that it was far worse than I imagined, and actually turned a global cooling trend into a global warming trend.

So when all the adjustments are taken out, the Earth turns out to have been cooling for the past 70 years, not warming.

smoker
View all posts by Frank Davis →
This entry was posted in Uncategorized and tagged agw, madness, Politics, terrorism. Bookmark the permalink.

47 Responses to Earth is Cooling, Not Warming