Readers may have wondered yesterday how a theoretical physicist like Andrei Sakharov came to know anything at all about genetics. In 1930, Soviet biology had fallen under the spell of Trofim Lysenko, who had no time for either genetics or mathematics, and who was enthusiastically supported by Joseph Stalin and the Soviet press. Lysenko was to remain in control of Soviet biology for nearly 35 years, until he finally was ousted in 1964.

In this circumstance, when Soviet theoretical physicists began to become concerned about the genetic impact of nuclear weapons,  they had to set up their own secretive biological unit under the leadership of Igor Tamm, one of Sakharov’s mentors and colleagues. 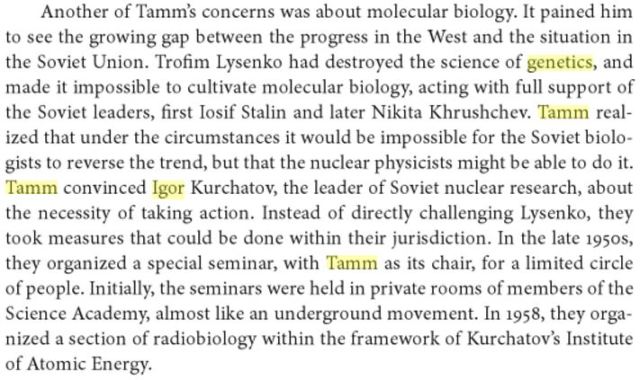 It was in this manner that Andrei Sakharov began to learn about Western advances in genetics. Eventually, it was partly through the efforts of Sakharov and Tamm that Lysenko’s stranglehold on Soviet biology was eventually broken.

Lysenko’s rise had occurred outside mainstream biology. From a review of Lysenko and the Tragedy of Soviet Science:

Lysenko was an poorly educated agronomist who happened to have been in the right place at the right time: In the ’30s, “Pravda” wrote him up as a pioneering scientist. Recognizing that newspapers and popular support could fuel his rise to the top of Soviet society, he set about making a name for himself as a scientist in non-academic journals and periodicals. His peasant upbringing and miraculous findings–never empirically proven or duplicated–made him a star proletarian scientist, the kind needed to bring about true Communism.

Under Lysenko’s view, for example, grafting branches of one plant species onto another could create new plant hybrids that would be perpetuated by the descendants of the grafted plant. Or modifications made to seeds would be inherited by later generations stemming from that seed. Or that plucking all the leaves off of a plant would cause descendants of the plant to be leafless.

Lysenkoism was “politically correct” (a term invented by Lenin) because it was consistent with certain broader Marxist doctrines. Marxists wanted to believe that heredity had a limited role even among humans, and that human characteristics changed by living under socialism would be inherited by subsequent generations of humans. Thus would be created the selfless new Soviet man.

Also Lysenko himself arose from a peasant background and developed his theories from practical applications rather than controlled scientific experiments. This fit the Marxist propaganda of the time holding that brilliant industrial innovations would arise from the working classes through practical applications. Lysenko’s theories also seemed to address in a quick and timely manner the widespread Soviet famines of the time arising from the forced collectivization of agriculture, rather than the much slower changes from scientific experimentation and genetic heredity.

Lysenko was consequently embraced and lionized by the Soviet media propaganda machine. Scientists who promoted Lysenkoism with faked data and destroyed counterevidence were favored with government funding and official recognition and award. Lysenko and his followers and media acolytes responded to critics by impugning their motives, and denouncing them as bourgeois fascists resisting the advance of the new modern Marxism.

The V.I. Lenin Academy of Agricultural Sciences announced on August 7, 1948 that thenceforth Lysenkoism would be taught as the only correct theory. All Soviet scientists were required to denounce any work that contradicted Lysenkoism. Ultimately, Soviet geneticists resisting Lysenkoism were imprisoned and even executed. Lysenkoism was abandoned for the correct modern science of Mendelian genetics only as late as 1964.

The Forbes article from which these quotes are taken continues:

This same practice of Lysenkoism has long been under way in western science in regard to the politically correct theory of man caused, catastrophic, global warming.  That theory serves the political fashions of the day in promoting vastly increased government powers and control over the private economy.  Advocates of the theory are lionized in the dominant Democrat party controlled media in the U.S., and in leftist controlled media in other countries.  Critics of the theory are denounced as “deniers,” and even still bourgeois fascists, with their motives impugned.

Those who promote the theory are favored with billions from government grants and neo-Marxist environmentalist largesse, and official recognition and award.  Faked and tampered data and evidence has arisen in favor of the politically correct theory.  Is not man-caused, catastrophic global warming now the only theory allowed to be taught in schools in the West?

Might not exactly the same be true of the War on Smoking and the rise of Lifestyle Medicine? It is even more politically correct than Global Warming theory. And it also promotes vastly increased government power and control over the private economy (and private behaviour). Those who promote the theory are favoured with millions in government grants. Much of the evidence for it is faked or tampered. And no alternative theory gets any consideration.

Might it not be that the tobacco hypothesis for the cause of lung cancer was adopted not because it was scientifically valid (it was strongly contested by statisticians like R.A. Fisher), but because it conformed with the political preferences of its supporters. Richard Doll was a Communist, and although Bradford Hill was not, it was Doll who was to become the principal proponent of the new doctrine. Perhaps the idea, advanced by two virtual non-mathematicians, that lung cancer could be prevented simply by stopping smoking had a similar attraction as Lysenko’s idea that new hybrids could be created simply by grafting branches onto plants, or that rye could be transformed into wheat and wheat into barley.

If so, the West may have far outdone Lysenko, whose doctrines held sway for a mere 35 years, with antismoking and lifestyle doctrines which have held sway for almost twice that duration. And the ‘selfless new Soviet man’ may have met his match in the equally selfless non-smoking modern Western man.

smoker
View all posts by Frank Davis →
This entry was posted in Uncategorized and tagged agw, Politics, science. Bookmark the permalink.