Lambs To The Slaughter

Some readers may remember that I did a few cartoons back in Jan/Feb, and threatened to do more. But I largely gave up because they just took far too long. I was drawing them on paper, and then scanning them into my computer, and colouring them up using MS Paint.

Well, yesterday I received a new toy: a graphics drawing tablet. I’ve spent much of the day getting it unboxed and working. I’ve also got Manga Studio 5, which is a cartoon drawing utility, and I’ve got that working too.

I think it’s going to take me a while to figure out to use it. But I’m hoping that when I’m up to speed, I’ll be able to produce cartoons much more quickly. Like maybe in the time it usually takes me to write this blog. 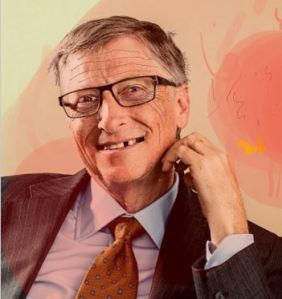 Anyway, once I had it up and running, and I was reading about an interview of Bill Gates while fooling around with Manga Studio, I started ‘denormalising’ or ‘demarketing‘ him a bit, knocking out a tooth here and there, and messing up his perfectly coiffed hair.

At least on global warming he recognised that the warming has actually stopped for the past 18 years:

“The heating levels have not tracked the climate models exactly, and the skeptics have had a heyday with that. It’s all within the error-bar range. To me, it’s pretty clear that there’s nothing that relieves this as a big problem. But when people act like we have this great certainty, they somewhat undermine the credibility. There’s a lot of uncertainty in this, but on both the good and the bad side.

I don’t think it’s ‘within the error-bar range’: they didn’t predict the pause at all. And I don’t think it actually ‘keeps summing, summing, summing’ either. It’s not that simple. Carbon dioxide only absorbs radiation in restricted wavebands, and at saturation will it absorb all of the radiation in those bands. However much carbon dioxide is added, it won’t absorb any more. It’s not a simple ‘summing’ process.

But why should Bill Gates know that? He’s spent most of his life a computer geek and corporate CEO. I doubt if someone living that kind of life has the time to read about or think about anything much else than the full time job they’re doing.

In fact, I’d even suggest that people like Bill Gates (and Michael Bloomberg) are almost certainly rather ignorant people. And also that when they step outside their limited skill set (management, computers) they’re probably even more suckers for snake oil salesmen than anyone else. They’re lambs to the slaughter.

I think that they all belong to a completely different culture – a closed bubble – disconnected from what most people know. They only ever talk to each other, at glittering soirées where they’re surrounded by bloodsuckers demanding their money.

And Donald Trump is probably no different. He has some pretty simplistic views too. It’s just it seems that his views are much nearer to what many Americans think than the others.

I imagine it was much the same in France in 1788. The aristocracy were probably as vapid and simple-minded and self-absorbed and arrogant as any of our contemporary wealthy aristocrats.

And then they all had their heads chopped off.

smoker
View all posts by Frank Davis →
This entry was posted in Uncategorized and tagged agw, cartoons, smoking ban. Bookmark the permalink.

20 Responses to Lambs To The Slaughter