Another article by Klaus K in Denmark, this time about the fall in private consumption after the introduction of the Danish smoking ban in 2007. I noted the same thing in the UK in the ISIS survey.

Why is private consumption not rising? 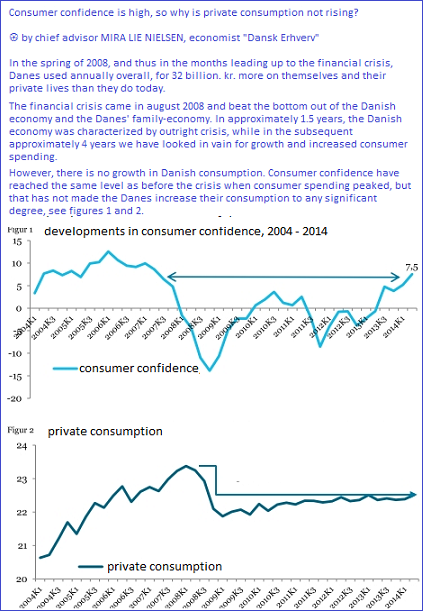 Danish private consumption is 32 billion crowns lower in 2014 than in early 2008, writes Danish Business in an analysis (1), mentioned in Berlingske December 15. (2).

Actually private consumption is almost 50 billion lower today, if you leave out the increased state taxes that Danes pay compared to 2008, the analysis shows.

Economists do not understand this weak private consumption: (3) Why are Danes not starting to consume again after the financial crisis? They have plenty of money in their accounts, writes Danish Business. So why do consumers not consume like they did before 2008, and make economic growth speed up again?

The growth killer that nobody notices, is the smoking ban of 2007.

And this applies not only in Denmark but throughout the EU. All nation states have committed themselves to introducing anti-smoking laws after the accession to a strange UN-treaty from WHO (4) with the alleged intention of reducing tobacco use. Given WHO’s marriage-like partnership with the pharmaceutical giants however (5) it is more likely that the intention is to sell Nicorette.

The problem with anti-smoking laws is that they cut a large piece out of the economy: It requires all companies to introduce a smoking ban – thus prohibit smokers’ demand for places where they can smoke. Overall economic activity is naturally weaker when the state prohibits 20% of its citizens from demanding a service which is important to them.

The negative consequences of this demand ban has been extensive because it has led to a “home culture” (6), which weakens virtually the whole retail sector. The reason is that the smoking ban drives many smokers out of public space, where most consumption takes place. Smokers literally migrate from public to the home sphere after a smoking ban, because their preferred vice is now banned almost anywhere outside the home.

A large and thorough study from the London School of Economics of 67,000 Americans’ habits before and after smoking bans concluded that smokers spend one hour more per day at home after a smoking ban, while non-smokers do not change their habits. Before the smoking bans smokers spent this hour on activities in the public sphere, for example restaurants, transportation, entertainment and retail. The study shows that the hospitality industry in total loses 26% of the time with customers after a smoking ban. (7)

It is only natural that retailers should suffer when 20% of the population spends much less time in public spaces.

Skeptics will argue that people compensate by buying online, but that is unlikely. People simply consume less in a home culture: They cut down drastically on all expenses associated with public spaces, for example cafes, restaurants, hotels, hairdressers, taxis, jewelry and entertainment. It is precisely in these areas that Danes spend less money according to the Danish Business analysis.

Smokers lose quality of life
after a smoking ban

The only Danish economist who has pointed out negative effects of the anti-smoking policy is economics professor Chr. Bjørnskov of Aarhus University (8). Using the EU-surveys he notes that smokers say they have poorer quality of life after the introduction of smoking bans and raising cigarette taxes, while non-smokers do not experience improved quality of life after these measures. Thus, overall the EU-populations become less happy after the anti-smoking policies, and therefore consume less.

Bjørnskov is generally skeptical of the idea that health policies lead to economic improvement (9).

But are there no economic benefits from the smoking ban? Lower health care costs for example? In Denmark unfortunately not: Hospital admissions have skyrocketed since the smoking ban. In the six-year period up to the ban hospital admissions increased according to Statistics Denmark by 0.9% annually, while the rate has more than doubled in the six-year period after the ban, to 1.9%. No one can claim that the smoking ban has been good for health in Denmark – it has turned out contrary to all expectations (10).

The many additional admissions have cost the state eight billion crowns annually since 2007 (11, 12). It is obviously unfair to blame the smoking ban for all of this extra expense, but conversely it goes without saying that there will be more sick and depressive Danes when 20% of them lose quality of life.

Only the pharmaceutical industry
wins with the smoking law

How much did the state lose from the smoking law? No one knows. It might be as much as a double-digit billions annually in lower VAT revenues, lower corporate taxes, more unemployment and more depressed and sick Danes.

The state has, however, compensated for these losses by charging significantly more unavoidable taxes on the Danes – a total of 15.5 billion annually, according to the Danish Business analysis. Thus Danes have become poorer. Yet the state has run deficits on average 50 billion annually since 2008. (14) This money has been borrowed abroad or, since 2014, by bringing forward the taxation of future Danish pension payouts. The money will be missing later in other words.

Given the huge annual government deficit and the weak economic growth since 2008, it is remarkable that only one economist has described what may be a major growth killer.

The introduction of the smoking ban is the most striking difference between today’s society and the pre-2007 society, and this explains the significant difference in the underlying performance of the economy since then. Until the smoking ban is repealed or relaxed, it is completely unrealistic to hope for higher growth rates like those existing before the ban.

When many people are prohibited from demanding what they want to consume, economy transforms into zero-growth. That happened in the old eastern European countries and this is almost the same situation in Denmark today.

And the debt? That must be paid by future generations – the children. 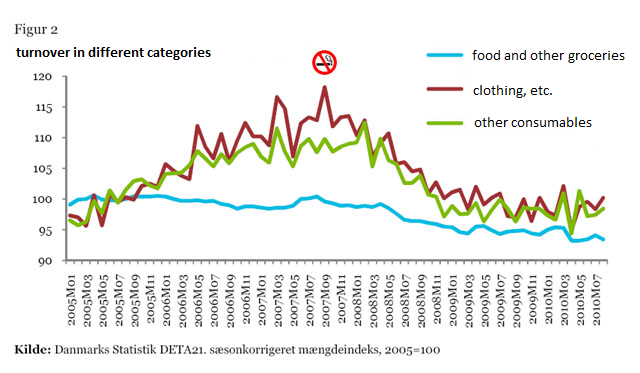 53 Responses to Smoking Ban – A growth killer nobody notices