I spent quite a long time today reading about Brock Chisholm (born 1896, Canada. died 1971), who was the first Director General of the World Health Organisation, which was formed in 1948.

According to Brock Chisholm, the World Health Organization, and the Cold War, he was a psychiatrist and an eugenicist:

Well before leading the WHO, he had been a vocal critic of organized religion and especially the Catholic Church. He favoured birth control, sterilization practices, negative eugenics, and even euthanasia.

And, as a WW1 veteran, he seems to have been as much interested in preventing war, as

After two cataclysmic world wars within thirty-one years, others besides
Chisholm were beginning to ask why they had happened and what could be
done to prevent a third. How could the prevalence of war be lessened? Some
believed that human nature was the root cause of wars; others placed the
blame on nation-states. The latter view posits that we are products of the
societies in which we are born and raised, and that it is these societies that
make wars. Thus the first group explained the world’s ills “by the evil in
man,” the second by “the evil qualities of some or all of the states.” Both
sides in this debate included pessimists and optimists. The former believed
that wars are inevitable, either because these evils are so deeply rooted in our
genes, as it were, that nothing can be done about them; or because nation-
states will always emphasize their own selfish interests. By contrast, the
optimists believed that we can either change human attitudes, by education
perhaps, and thereby produce people less likely to turn to war; or that we can
bring nations together so that they are less likely to wage war.

Initially, as a psychiatrist, Chisholm placed the blame on human nature
but believed that this could be addressed by changing the way children were
raised. His view was only strengthened during his tenure with the WHO,
where he witnessed close up the self-interest of nation-states. Like a piper,
the WHO “has to play those tunes which its political masters in the Assembly
were prepared to pay for,” and these masters were taking their orders
from governments. It is curious that even though he had little faith in the
capacity of nation-states to act in ways other than self-interest, he still
believed that the future belonged to the UN. But how could the UN act in an
enlightened way when its members were self-centred nation-states?

David Mitrany, a Romanian-born former professor of political economy at
Princeton and Harvard, and an officer in the British Foreign Office during the
Second World War, presented one answer to this dilemma in the 1940s. “The
evil of conflict and war springs from the division of the world into detached
and competing political units,” he wrote, and there were only two ways out
of this dilemma: world government or “spreading a web of international
activities … through which the interests and life of all nations would be
gradually integrated.” Thus, instead of concentrating on disarmament
conferences and other matters that cut to the very heart of national self-inte-
rest, and that never seemed to accomplish anything, efforts should be made to
“buy” nations through guile. Nation-states could be enticed into a cooperative
mode by building international organizations based on specific functions, such
as health, that obviously demanded international cooperation
and whose importance could be perceived immediately.

… the functionalists
were attempting to undermine what they viewed as the basic causes of war
“by establishing international functional organizations, which deal with
‘non-political’ issues such as public health, illiteracy and hunger more ad-
equately than individual states can possibly do. The cooperation built up in
the functional or ‘non-political’ sphere is ultimately expected to ‘spill over’
into the frankly ‘political’ sphere of human interactions, eventually render-
ing peaceful relations between nation-states the only viable and inevitable
outcome.”

This notion that nation-states are the cause of war is now a modern orthodoxy, routinely trotted out as a justification for the EU into which European states are to be dissolved, after being ‘bought through guile’, and bound by treaties of cooperation such as the Framework Convention on Tobacco Control (FCTC). Chisholm was also an advocate of world government, saying:

“To achieve world government, it is necessary to remove from the minds of men their individualism, loyalty to family traditions, national patriotism, and religious dogmas.”

He seems to have been perfectly happy to tear up more or less everything. He regarded man’s worst enemy as man himself:

…in words that his countrymen would have instantly
recognized as pure Chisholm, he continued: “The world was sick, and the ills
from which it was suffering were mainly due to the perversion of man, his
inability to live at peace with himself. The microbe was no longer the main
enemy; science was sufficiently advanced to be able to cope admirably with
it, if it were not [for] such barriers as superstition, ignorance, religious intol-
erance, misery, and poverty. It was in man himself, therefore, that the cause
of present evils should be sought; and these psychological evils must be
understood in order that a remedy might be prescribed.”

He was even quite happy to dispense with Good and Evil, if that would prevent war:

This seems to have been a man who was more desperate to prevent war than to cure disease. 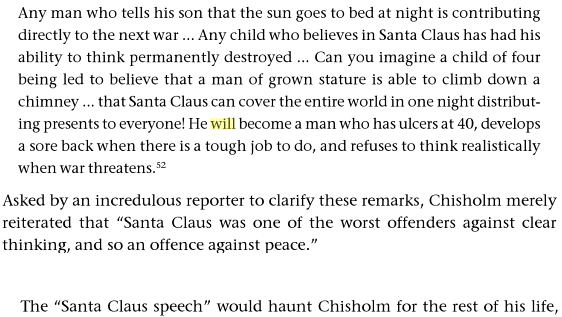 Such was the man who seems to have almost single-handedly founded the WHO. He strikes me as being more than slightly barmy. And I must say that I think that the idea that nation-states are the cause of war strikes me as rather naïve and simplistic. Instead, I think that the cause of war lies in the attempt by one group of people to take power over other people – something that is currently well exemplified by the WHO’s War on Smokers.

And in the case of the EU, we have the irony that a political entity that was intended to prevent internecine European wars has now expanded to the borders of Russia, sparking an international crisis.

smoker
View all posts by the archivist →
This entry was posted in Uncategorized and tagged eu, WHO. Bookmark the permalink.