Ukraine: Smoking Up, Lung Cancer Down

H/T Fredrik Eich for this WHO graph: 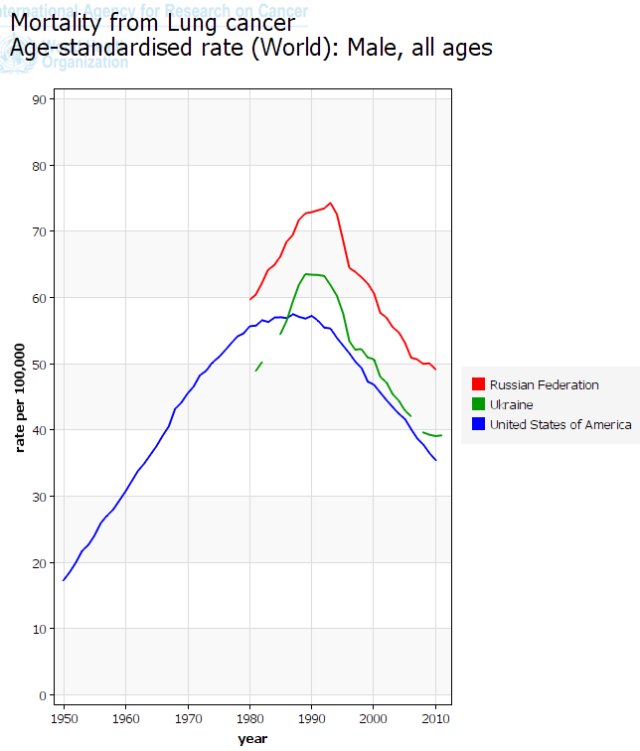 It shows US and Russian and Ukrainian lung cancer mortality all peaking about 1990, and then falling at pretty much the same rate.

“What’s surprising about that?” you ask, before adding, “As smoking prevalence in the USA fell, it was probably falling in much the same way in Russia and Ukraine as well.”

What’s more, smoking prevalence in Russia has actually been rising. From Tobacco in Russian History and Culture: The Seventeenth Century to the Present, edited by Matthew Romaniello, Tricia Starks, 2009, Anna Gilmore on page 260:

And a few pages later:

So there you have it. Russian and Ukrainian smoking has been ‘spiralling’. In Russia smoking prevalence has been rising since about 1990, and it was almost certainly rising before that too. And half the chiiiildren are smokers too! Completely the opposite to what’s been happening in the USA and western Europe.

Which rather suggests that whatever causes lung cancer, it isn’t smoking.

smoker
View all posts by Frank Davis →
This entry was posted in Uncategorized and tagged cancer, medicine, science. Bookmark the permalink.

52 Responses to Ukraine: Smoking Up, Lung Cancer Down