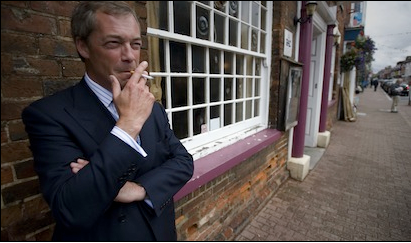 H/T Harley for Peter Hitchens’ Revenge of the Fruitcakes in American Spectator. It’s a perceptive article about Nigel Farage and the rise of UKIP. As Hitchens sees it, British conservatives have finally woken up to the fact that David Cameron isn’t really a conservative at all, and that the Conservative party has complete contempt for its conservative voters, who have only kept on voting Conservative out of habitual loyalty, and who are only now beginning to break the habit of a lifetime.

So, vaguely beginning to form in the electoral air is a specter of elections yet to come, which must haunt the nightmares of all the existing parties and of the modern liberal establishment. What if all the morally and socially conservative people in Britain were to unite across class barriers and demand an end to the cultural revolution that has transformed their lives for the worse since the 1960s? What if a new electoral force came into being that did not just call itself conservative, but actually was conservative? What if a government came into office that had genuine intellectual and moral objections to the left-wing project of multiculturalism, economic liberalism, sexual revolution, and open borders, which has had the West in its grip for half a century?

This was the point at which I stopped agreeing with Hitchens. Because – and perhaps because I’m not a conservative – I don’t think that everything that happened since the 1960s has been a change ‘for the worse’. I am, after all, a child of the 1960s, and was fairly fully engaged in it. I’m not opposed to multiculturalism, or economic liberalism, or sexual revolution, or maybe even open borders.

I was actually quite content living in Britain until about 10 years ago, when it started to become another country, and an increasingly alien country. And the principal manifestation of this change for the worse was the smoking ban that was introduced on 1 July 2007. In fact, for me, the UK smoking ban is the very embodiment of everything that has gone wrong with Britain (and almost everywhere else as well) in recent years. It’s a piece of authoritarian legislation driven by eugenic pseudoscience. It marks the point when our political representatives metamorphosed into our political masters. And also when millions of ordinary people were made into lepers and outcasts. And when Britain ceased to be a free country.

If I will never vote Labour or Lib-Dem (and most likely Conservative) again in my life, it’s because they either introduced the smoking ban (Labour), or enthusiastically supported it (Lib-Dems), or half-heartedly resisted it (Conservatives). And that’s why Nigel Farage, standing  alone  in the street, determinedly smoking a cigarette, is such a refreshing change for someone like me. He’s one of us, not one of them.

But Hitchens is an antismoker, of course, and he can’t see the powerful symbolism and attraction of this image. In fact he even seems to think that smoking causes testicular cancer (which Farage survived). And in this respect, if in no other respect, Hitchens has drunk as much of the post-1960s kool-aid as anyone else. And if Hitchens doesn’t like cigarettes, he doesn’t seem to like beer either. And he tut-tuts that Farage isn’t a social conservative, because he has entertained the idea of decriminalising drugs, shock horror.

But my guess is that he is a demolition man, not a builder. His task is to destroy. He is a missile directed straight at the heart of David Cameron’s Tory Party. And when he has finished exploding he may, with luck, have cleared a space for the creation of something Britain has never really had but now badly needs: a truly conservative party, dedicated to national independence, the rule of law, liberty of speech and thought, the sanctity of private life, and the married family.

And here Hitchens may prove to be right. Nigel Farage is a kind of Joker or Pied Piper who may well end up destroying the Conservative party, for the reasons Hitchens gives, and in doing so he may well also usher in the sort of conservative party Hitchens wants. But in ‘exploding’ he must also vacate the stage, and be replaced by the authoritarian nonentities standing behind him. None of these will ever be photographed smoking and drinking. They’ll probably be as tyrannical as any ‘progressive’ modern lefty. Farage will lure in the voters with his blokish man-on-the-street image, and then they’ll take over.

And that will be the point when I stop voting UKIP. Because my vote is for the “raffish, irrepressible and troublesome” Farage, not for conservatism.

After I’d read the article, I returned to study the photo of Farage above it. I hazarded a guess that it was taken outside the pub in Stony Stratford where he came to speak against its proposed outdoor smoking ban. And a street view from Google maps proved that indeed it was the Bull Hotel on the High Street in Stony Stratford. 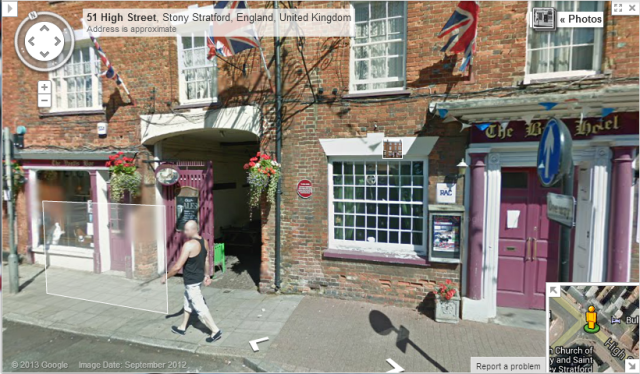 And so I would have very likely been standing only a few feet away from him when that photo was taken, perhaps still holding the handmade placard with which I drove across England to Stony Stratford that day. And I would have been smoking too.

smoker
View all posts by Frank Davis →
This entry was posted in Uncategorized and tagged Stony Stratford. Bookmark the permalink.

29 Responses to The Pied Piper