Ever wondered what happens when a cloud of rocks skims low over the Earth and back out into space? Yes? Well, here’s your golden opportunity to find out. 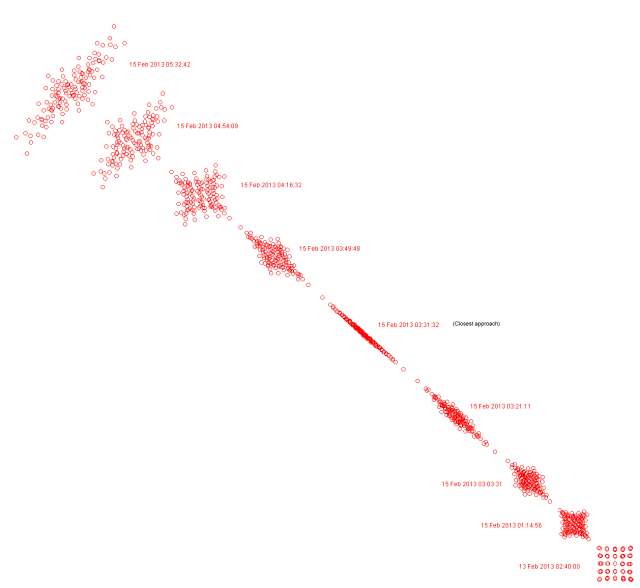 The rock cloud starts out as a cube of 125 rocks (bottom right), and as it approaches the Earth it first bunches together a bit (probably because of the gravitational attraction between the rocks).

Then, as it gets close to the Earth, it begins to elongate in the direction of the Earth, and gets squeezed laterally at the same time. This is probably because the front end is nearer the Earth, and accelerates slightly faster than the back end. And also the left hand side is pulled rightward, and the right hand side leftward.

And once it passes over the Earth, the back end gets pulled back more strongly than the front end, so the cloud carries on lengthening (if it doesn’t look like it does, it’s probably because the cloud is moving downwards into the page after it passes over the Earth). And the rocks that were on the left hand side go over to the right hand side, and the right hand side rocks go out the left hand side, changing places. At least, I think so.

Anyway, that’s what happens if it’s a cloud of rocks. But if it’s a pile of rocks in contact with each other, the pile will be able to elongate, but it won’t be able to contract laterally very much because the left hand side rocks will be impeded by the right hand side rocks. They won’t swap sides like the cloud. So a rock pile will elongate into a long thin rock pile, a bit like a sausage. It might even break up into a long train of separate rocks.

This is what happens when small asteroids come too close to large planets, and are said to be torn apart by ‘tidal forces’. This because the same forces act to produce the Earth’s ocean tides, so that the Earth’s oceans get pulled towards the Moon on the side nearest to it, but less strongly on the opposite side, much like with the rock cloud.

Anyway, next time someone asks you what happens when a pile of rocks skims low over the Earth and back out into space – like they so often do -, you’ll be able to say: “Easy. It’s like this…”

smoker
View all posts by Frank Davis →
This entry was posted in Uncategorized and tagged DA14. Bookmark the permalink.