Why The Economy Won’t Grow

I keep reading about attempts to encourage economic growth, usually by cutting interest rates, or something along those lines.

But the way I see it is that, once you’ve kicked a quarter of the population – the smokers – out of the economy, giving them nowhere where they can spend their money, you’ve created a permanent reduction in consumer demand, and therefore a permanent recession.

It’s easy to explain how it works. At the end of this week, I’m going to a wedding in London. I haven’t been to London for well over 10 years. And I ought to be excited about going there, and be looking forward to visiting shops and museums and art galleries and so on like I used to do.

But I’m not going to do that. I’m a smoker and I’m not welcome anywhere, so I’m going just for the wedding, and nothing else at all. I’m going and coming back more or less as quickly as I can. In fact, the whole trip will probably be a bit of an ordeal (except for the wedding). And I never used to see visiting London as an ordeal. After all I used to live there once, and I liked the old town back then. Now it looks like a sort of hell.

So my spending in London is going to be restricted to train tickets. There’ll be no food, no drinks (because that’s all laid on anyway, I think), no newspapers, no magazines, no coffees, no books, nothing.

It’s not just London. A few months back I saw that Lana Del Rey was doing a show in Birmingham later this year. I don’t live too far from Birmingham, but while I was greatly attracted by the idea of seeing her live, the idea of going to Birmingham for an evening, and being unwelcome there too, eventually outweighed the powerful pull of Lana. So I didn’t buy a ticket. I won’t be going.

And I’ll bet that all over England (and France and Spain and Italy and everywhere where smokers have been made completely unwelcome) smokers are making similar choices. After all, they no more want to visit places they’re not welcome than I do.

Antismoking zealots like Deborah Arnott say that, if smokers stop spending in pubs and cafes, they’ll simply spend their money elsewhere, and so there’s no net impact on the economy. So smoking bans simply shift spending from one thing to another. But what none of them ever explains is what smokers spend their money on instead. What is it? Books? Music? New curtains and carpets for their homes? The only thing that I can see that smokers spend more money on is going to countries or states where they still are welcome. And this inevitably means that their local economy doesn’t see their money, but instead some other country or state. The same applies if they buy imported or smuggled tobacco, where once again their money isn’t being spent in their local economy.

Unfortunately, such is the stranglehold that Tobacco Control has got on the media and government and more or less everything else that most people believe the likes of Deborah Arnott, and suppose that smoking bans have little impact on overall consumer demand. Probably most economists think that too. And in part that’s probably because they have never before seen what happens when large numbers of people are effectively expelled from society. It’s not part of their experience. And they don’t even know it’s happening, because the Tobacco Control lie machine is very good at pulling the wool over their eyes.

But, regardless of what they all think, I think that governments can do whatever the hell they like to try and boost demand and re-start their stalled economies, using tried and trusted expansionary measures. They can set all the economic traffic lights to green. But still the economic traffic won’t start moving. And I know this because I’m one of the drivers sitting in those motionless cars.

So, in my view, the entire Western world is set to experience continuing and gradually deepening recession/depression. And this will continue until smoking bans are lifted, and smokers made welcome again. And there’s precious little sign of that happening anytime soon.

In a couple of months time, Russia is introducing its own smoking ban along the usual draconian lines.  60% of Russians smoke. Their economists probably haven’t a clue what the economic impacts of smoking bans are either, no doubt having read all the upbeat Tobacco Control lies. So I predict that deep economic slump will hit Russia soon, most probably showing up in the figures for 2014.

And the slump will continue until economists finally figure out that Tobacco Control is lying about the supposedly beneficial consequences of smoking bans (e.g. increased productivity). Maybe a few people will eventually realise that every claim that Tobacco Control has ever made is a lie.

Still on the economy, much is made of the public debt these days, as a ratio of GDP. But Ambrose Evans-Pritchard published an interesting graph a few days back of UK public debt. The Telegraph is behind a pay wall these days, but I managed to see it. 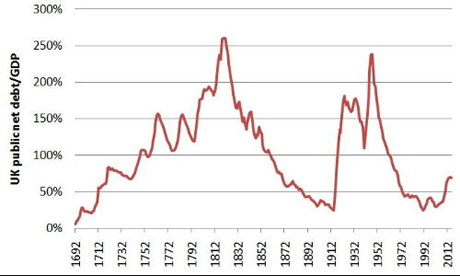 Britain’s public debt was 260pc of GDP in 1816 at the end of near perma-wars: Seven Years War, American War of Independence, and the Napoleonic Wars. This was whittled down to 24pc over the next century by the magical compound effects of economic growth.

The debt reached 220pc in 1945, the price for defeating fascism. This was certainly a drag on the post-War recovery, but it did not stop debt falling to 36pc by the mid-1990s.

But then, there isn’t going to be any economic growth to whittle down Britain’s current (historically rather modest) debt – for the reasons just given.

smoker
View all posts by Frank Davis →
This entry was posted in Uncategorized and tagged economics. Bookmark the permalink.

28 Responses to Why The Economy Won’t Grow