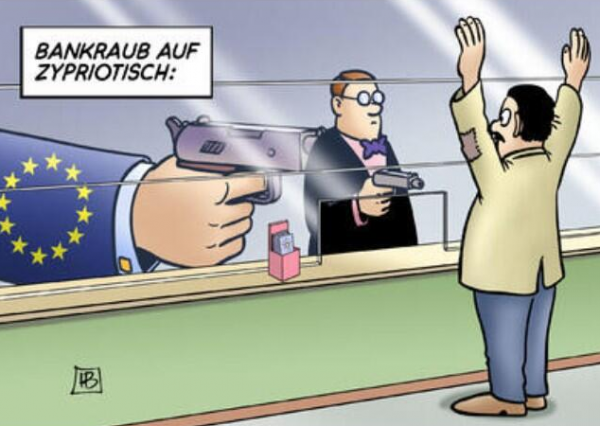 Cyprus is to receive a €10 billion (£8.7 billion) bail-out from the eurozone to recapitalise its ailing banking system in return for a series of drastic measures which will hit the country’s savers.

The Mediterranean island nation becomes the fifth country to turn to the eurozone, following in the footsteps of Ireland, Greece, Portugal and Spain.

The emergency funding will be used to prop up the country’s banks which were hit by the financial restructuring of nearby Greece.

The Cypriot banking system had grown to be eight times the size of the country’s fledgling economy – which accounts for just 0.2pc of the eurozone’s gross domestic product.

But in a departure from previous bail-outs, the country’s savers are being asked to make sacrifices.

The terms of the deal mean that Cyprus’s savers will sacrifice up to 10pc of their deposits in a move which will raise as much as €6 billion.

Actually, the country’s savers are not being “asked” to make sacrifices, they’re being told that they’re going to.

The levy is intended to raise around €5.8 billion and will take force on Tuesday after a bank holiday on Monday. This has precipitated queues at the “hole in wall” cash dispensers machines, as people have sought to remove their money before the levy is extracted.

The Cypriot government, however, has got there first. Bank customers are only permitted to withdraw the balance of their deposits, less the amount of the levy. Meanwhile, a block has been put on the electronic transfer of funds, stopping people moving money out of the country.

Almost half of the depositors, though, are believed to be non-resident Russians, which means those that did not pre-empt the action have been caught by the freeze.

Russians aren’t going to like that very much, are they?

In the coastal town of Larnaca, Andy Georgiou, 54, speaks for them all. “I’m extremely angry”, he says. “I worked years and years to get it together and now I am losing it on the say-so of the Dutch and the Germans”. He is a British-Cypriot who returned to Cyprus in mid-2012 with his savings.

An unnamed pensioner was a little more direct. “They call Sicily the island of the mafia. It’s not Sicily, it’s Cyprus. This is theft, pure and simple”, he says.

But it’s perhaps not to much Sicily’s government that are the mafia in this business, but the EU who arranged this ‘rescue package’.

Dutch Finance Minister Jeroen Dijsselbloem … says that, without the levy, it would have been impossible to save Cyprus’ financial sector “We are not penalising Cyprus …,we are dealing with the problems in Cyprus”.

Mats Persson in the Telegraph:

Seventeen Eurozone finance ministers locked themselves in a room and decided that every Cypriot depositor – whether super-wealthy or dirt-poor – will, out of the blue, see part of their hard-earned money seized. Remember, Cypriot President Nicos Anastasiades explicitly promised in his election campaign, only a few weeks ago, that depositors were safe. The Cypriot electorate now faces losses on deposits as well as years of austerity (under the bailout loan). What’s worse, deposits under €100,000 are supposed to be protected by EU law, not raided by EU leaders.

All this must have been decided at the very highest levels of the EU, by the likes of Rompuy and Barroso and others. And no other conclusion can be drawn than that in the EU we have a government of thieves that will brazenly rob the bank accounts of savers, purely to keep their EU ‘project’ afloat, and to maintain themselves in the style to which they have become accustomed.

Who’s going to have their savings stolen next? Greeks? Italians? Spaniards? I can’t think of anything more likely to create a banking crisis across the entire EU, as people rush to find a safe haven for their savings before the Brussels mafia come to steal it from them.

For those who read the previous article on the topic of last minute chaos and confusion in Cyprus, and Europe, it will come as no surprise that the previously scheduled Monday bank holiday (aka Green Monday) has been extended into Tuesday. So prepare to not be surprised. “The Cypriot cabinet has declared Tuesday a bank holiday, for fear of capital flight, and this may even be stretched to Wednesday, as depositors are certain to withdraw huge sums from the Cypriot banks after the haircut imposed.”

Today, lots of people woke up in shock and horror to what happened in Cyprus: a forced capital reallocation mandated by political elites under the guise of an “equity investment” in insolvent banks, which is really code for a “coercive, mandatory wealth tax.” If less concerned about political correctness, one could say that what just happened was daylight robbery from savers to banks and the status quo.

and, (emphases in original)

Saxo Bank CEO: “This Is Full-Blown Socialism And I Still Can’t Believe It Happened”

It is difficult to describe the weekend bailout package to Cyprus in any other way. The confiscation of 6.75 percent of small depositors’ money and 9.9 percent of big depositors’ funds is without precedence that I can think of in a supposedly civilised and democratic society. But maybe the European Union (EU) is no longer a civilised democracy? This is a breach of fundamental property rights, dictated to a small country by foreign powers and it must make every bank depositor in Europe shiver. If you can do this once, you can do it again. Depositors in other prospective bailout countries must be running scared – is it safe to keep money in an Italian, Spanish or Greek bank any more?

Cyprus President Nicos Anastasiades just addressed the nation in a dramatic Sunday night speech regarding the bailout of Cyprus, which will see a one-time tax on everyone with cash in Cypriot banks.

Cyprus is in a huge crisis, and the country was given two choices, blackmail style.

Either the government could get no help, and see a complete collapse of the economy and the financial system.

Or take the “bailout” deal, which involves the painful deposit tax.

In a note out yesterday, Sebastien Galy of SocGen explained why this was unwise.

This will probably go down as an ill thought out rescue plan with consequences for peripheral Europe. Savers beyond 100K EUR will participate in the restructuring, targeting presumably questionable moneys. It breaks a cardinal rule, namely public trust on which money relies. Had they thought their savings were at risk from a restructuring, savers would have run on local banks, hence it is different from a tax. Some peripherals will suffer at the opening in Europe and hit EUR. It could be the trigger that our colleagues were expecting. Twitter reports of cash machines running out in Cyprus for what such unverified information is worth.

In other words, yes, the government may have the legal legitimate power to tax (savings), but this is a major trust destroyer.

smoker
View all posts by Frank Davis →
This entry was posted in Uncategorized and tagged eu, Lies, thieves. Bookmark the permalink.