A headline in the Telegraph caught my eye this morning. Included was a graph of GDP, onto which I immediately scrawled an arrow showing when the UK smoking ban came into force.

A Treasury spokesman said: “”The official forecast was that the UK economy would contract in the last quarter of 2012 so this figure is not unexpected. It confirms what we already knew – that Britain, like many European countries, still faces a very difficult economic situation.

“It underlines what the Chancellor said at the Autumn Statement and the Governor of the Bank of England said this week: while the economy is healing, it is a difficult road.

Is the economy healing? The way the Treasury spokesman described it, it was as if the UK economy had been the victim of a road accident, but was now gradually on the mend, perhaps aided by infusions of Quantitative Easing and rock bottom interest rates.

Most economists seem to think that the nasty accident was the late 2007 Credit Crunch and banking crisis. But nobody seems to talk very much about the Credit Crunch any more. Are we still in one? If not, why isn’t the economy recovering? Perhaps they’re using the wrong medicine.

For the economists completely ignore the effects of the UK smoking ban that came into force slightly earlier in 2007, and which were perhaps obscured by the subsequent credit crunch – if only because antismoking organisations had declared the UK smoking ban to be a great success, welcomed by everyone, smokers included. And if it was such a great success, there couldn’t have been any adverse economic consequences, could there?

However, while a credit crunch may last for a while, once credit eases, the economy can be expected to recover. But the impacts of smoking bans don’t go away. People change their behaviour, and it stays changed. So, if there are any adverse economic effects consequent on the introduction of smoking bans, they will continue to be felt years thereafter. So some estimate needs to be made of these impacts.

Recently I’ve been looking at the figures in the ISIS study, and wondering if I can tease some economic impact figures out of it. There are at least three questions in it with implicit economic consequences.

1) How often do you go to pubs, cafes, and restaurants? This question had 5 optional checkboxes: More/much more/same/less/hardly ever. If ‘much more’ is given a value 2, and  ‘same’ is given a value 1, and ‘hardly ever’ a value of 0, the 400-sample survey should be able to how much smokers are now going to these places, and a good indication of how much more or less they are spending there. And also spending on getting there.

2) How often do you meet up with friends or family? This question had the same checkbox options, except that ‘hardly ever’ was replaced by ‘much less’. Now it’s reasonable to suppose that when people meet up with friends or family, they usually buy food and drink to go with their parties, dinner parties, dances, or whatever, whether the social gatherings are at home or in pubs or cafes or clubs. And they will also spend money phoning people and arranging venues. And they’ll spend money on transport to get there. They may even spend money on clothes, shoes, hairdressing, and the like. So this question may be able to give a clue about how much more or less money people have been spending.

3) Do you spend more or less time at home? This question had the same checkboxes as the one above. And the responses to this question may also be construed to have economic consequences. Because to the extent that people stay home more, they are spending less time anywhere else, and spending less money in those places. They will most likely not be spending much time in pubs, cafes, restaurants, cinemas, theatres, art galleries, museums, or anywhere else. Nor will they spend money travelling to them, nor phoning to arrange to visit them. So the responses to this question could be used as an indicator of change in spending across the whole economy, rather than just in pubs and restaurants or on food and drink and entertainment.  Although of course people can spend money at home, by buying things online, or ordering pizzas to be delivered, and such like.

There are also a set of checkboxes relating to places where people feel ‘adversely affected’ by smoking bans. And this provides extra information.

Question 2), about meeting up with friends or family, can also provide further information. For to the extent that smokers have been seeing more or less of friends or family, to that same extent, friends or family have been seeing more or less of them, and consequently spending more or less on entertainment as well. If S is the prevalence of smoking/smokers, and F is the factor by which to multiply smokers’ pre-ban spending habits to give their present spending, then across the whole population spending by smokers will be S.F of its former level. And assuming that non-smokers meet up just as frequently as before with other non-smokers, then their change in spending will be (1-S).{ (1-S) + S.F}. And the new total post-ban spending will be the sum of these two values:  S.F + (1-S).{  (1-S) + S.F }. And when F=1 (no change), total spending will also be equal to 1 (no change). But if S=40% (the prevalence of smokers in Bulgaria) and F=0 (smokers never meet up with friends) then spending on entertaining friends and family across the whole economy falls to 0.36 of its former level. In Britain we know that S is 20% or higher. And the ISIS study may be able to give an estimate for F.

I dug out some figures today for household sector-by-sector spending in the UK in 2005, and marked up the sectors that smoking bans were most likely into impact, with the greatest impacts marked red, lesser impact yellow, others not at all.

I estimated that the two red-dotted sectors plus the alcohol and tobacco sector amounted to 28% of total UK household consumption. If the 20% of the population who are smokers dropped their spending in these sectors to 60% of their former levels, while non-smokers had maintained their former spending habits, total consumption of all goods by households would have fallen to 97.5% of its 2007 value – a 2.5% contraction.  So a fairly large change of spending habits by the 20% of smokers can have quite large impacts on the whole economy.

Furthermore, the impact is likely to gradually intensify over time. People do not generally lose contact with all their friends and acquaintances immediately upon the introduction of smoking bans. It’s a slow process of gradual attrition. And so the factor F used above to estimate changes in spending on entertainment of friends and family will tend to fall over time, increasing the economic impact on the whole economy as household consumption falls, in a gradual decay curve. 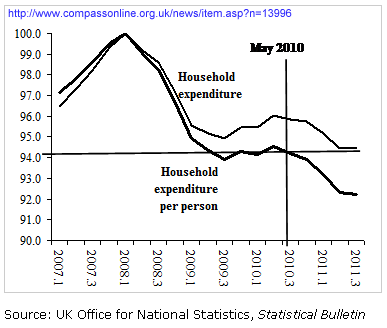 Is there any evidence of a fall in consumption in the UK? Yes, there is. The Bank of England in its first quarterly report in 2009 refers to a negative ‘demand shock’ that had become evident. A ‘demand shock’ is a sudden change in consumer demand. And in addition, when hunting around for graphs showing household consumption trends in the UK, I came upon the graph at left on the blog of an economics professor. And this shows the sort of slow decay curve after 2007 that could be expected when people gradually stop meeting up with their friends, and gradually reduce their spending accordingly.

It remains to be seen, of course, whether the ISIS study will provide sufficient data to make a estimate of changes in smokers’ consumption patterns, and whether the resulting economic consequences will be as large as those shown in the graph.

It will all be published in the ISIS study report in due course. But if a good case can be made that the UK smoking ban is having serious impacts on the UK economy (and there can be no doubt that it is having some negative impact), then no amount of Quantitative Easing, or low interest rates, or anything else, will serve to boost household consumption and ‘heal’ the economy. In fact, it will continue to gradually deteriorate. And so will every other economy in which smoking bans have been introduced.

smoker
View all posts by Frank Davis →
This entry was posted in Uncategorized and tagged economics, survey. Bookmark the permalink.