It All Mounts Up

A couple of people have offered to help out financially in the last few weeks. Mac the Knife, who’s one of my longest standing readers, and who’s none too well, is one of them. So I’ve been vaguely thinking about adding a Tip Jar to the blog, to drop a few pennies in if they’ve got no other way of helping. I’ve got lots of time, but not lots of money.

I was thinking today that my principal expenses in doing the International Social Impact Survey are going to be beer and tobacco and petrol. My modus operandi will be one of sitting in a pub with a beer and a cigarette and a packet of salted peanuts, maybe wearing blue jeans and white shirt, and then ambling over to anyone that I see smoking, to ask them if they’d like to do the survey. And doing things this way, day after day, it all slowly mounts up.

But those are the foreseeables. What about the unforeseeables? Once you get talking to people, anything can happen. And these are going to be people of all ages, and from all walks of life. It’s one reason why I’ve been a bit nervous about it. Last time I was interviewing people, one guy told me he was an ‘expert’. Maybe I’ll find myself talking to writers and politicians and doctors? Could be anyone. Anyone at all. Things could get real wild…

F’rinstance, s’pose I amble over to some girl sitting at a table on her own in the corner of the pub garden, and ask her if she’d like to complete the survey I’m doing, and she says “Sure,” and as I sit with my beer watching her tick the boxes, I suddenly realise that she’s Lana Del Rey, smoking one of her Pall Mall Blues.

Well, it could happen!

And obviously I’d have to buy her a drink, wouldn’t I? And I’d say that I was a big fan of hers, and she’d say yeah but have you bought my new album yet? And I’d say well no, not yet, but I was fixing to buy it maybe next week. And she pulls a CD out of her battered snakeskin handbag, and hands me one (just like Jred did a year or so back). So I coughs up £10. And that’s another expense. It all mounts up, see.

And then I sez what brings you to this sleepy little village in Gloucestershire young lady. I thought you spent your time in LA and NYC and London and Glasgow. And she sez she is actually driving from London to Glasgow via the scenic route through Gloucestershire, and stopped off here coz her vintage 1960 Fun Fun Fun Ford Thunderbird has developed a loud knocking sound in its engine or something, and she’s trying to get her manager on her mobile, but can’t get a signal. And she’s s’posed to be doing a gig in Carlisle tonite. 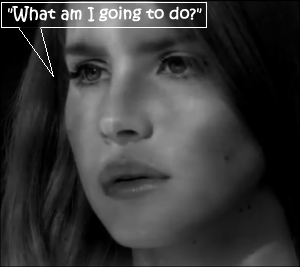 And then we chat some more about this and that, and then she looks at me pleadingly and sez, “Oh Frank what am I going to do? I’m stuck in the middle of nowhere, and my car’s broken and my phone dont work!” And being a gent I sez, no worries young lady, we’ll get you to Carlisle.

So we finish our drinks, and we climbs into my car, and we head for Carlisle tres vite. And that’s more gas and more expense. It all mounts up.

And then, when we’re just outside Wigan, Lana sez omygod, Frank, I left all my clothes in the T-bird, including my concert dress, the one with the sequins all over! What am I gonna wear, FFS?

So we cruise around Preston looking for concert dresses, and Lana finds one in a little corner shop, and it’s only £835. But of course we have to get her a handbag and a coupla pairs of high heel sneakers, and some lipsticks and a bottle of Chanel perfume, and some flowers for her hair. And coz she left her credit card in the T-bird, I picks up the tab. So now I’m about £1238.57 down. And it’s all mounting up very fast.

And Lana is asleep with her head on my shoulder when we finally roll into the main drag in Carlisle, about 10 minutes before the show’s due to start. And she sprints out of the car into the theatre, and I buys a ticket at the desk. It all mounts up.

And then Lana knocks em dead with a great storming show, even if the dress is maybe one size too big. And she dedicates her last number, Blue Jeans, saying this is for Frank.

And after the show Lana invites me backstage, and I gets to meet lots of sleb rockers like Sting and Bee and Slash and Burn, with Lana saying this is my new boyfriend Frank. And I gets talking to the Stone Roses about stone roses, whatever the hell they are.

And then halfway through all this I heads outside for a quick smoke, maybe accompanied by Sheryl Crowe. But then, when I try to get back in, this bouncer on the door sez not you buddy. You dont belong here. Youse far too old. And I sez for cryin out loud I’s Lana’s boyfriend! And he just laffs and sez And I’m Father Christmas.

And when everyone’s gone, and the theatre’s been locked up for the night, I walk back to my car, and climbs in, and drives all the way to wherever I came from. And just outside Dewsbury I buy myself a cheese sandwich and a coffee in an empty transport cafe, and stand outside in the dark and the rain. Which is another expense. It all mounts up.

Poignant, eh? I never get the girl.

And sure, I agree, it’s pretty improbable that you could find a sequinned concert dress in Preston.

Well, I mean, what if that happened, eh? And these are just the sort of eventualities that have to be factored in. Planned for. Thought through carefully. You have to be prepared for things like this. It would help to have a tip jar with a few quid in it to cover eventualities like this, don’t you think?

It would be a Tip Jar for beer and cigarettes and steak and gas and wild women. It wouldn’t be for a respectable Noble Cause or anything stupid like that.

73 Responses to It All Mounts Up