Vote No on California Proposition 29

Reproduced from his website with his permission, a guest post by regular Californian commenter Smokervoter on Proposition 29, which goes to the ballot in California on 5 June (next Tuesday). From ballotpedia:

If Proposition 29 is approved by California’s voters, the tax on cigarettes in the state will increase by $1.00 per pack. California’s current cigarette tax is 87 cents per pack. The total tax per pack of cigarettes, if Proposition 29 passes, will be $1.87/pack. The additional tax revenue will be used to fund cancer research, smoking reduction programs, and tobacco law enforcement.
Proposition 29 would generate about $735 million a year in new tax revenues, according to a 2012 report by the California Legislative Analyst’s Office.[2]

This is how the predatory Tobacco Control Industry lives – by state-sponsored theft from a targeted, demonised minority.

Vote No on California Proposition 29.

If you came here by way of the Cut to the Chase button and skipped the introduction you might have missed the we LOVE rational non-smokers part right at the git-go. We cater to not just smokers here at smokervoter.com. Indeed all people who fancy their own free will hopefully might find something to read here. Non-smokers who wouldn’t touch a cigarette with a ten foot pole have frequently shown their more tolerant side by joining in to vote down unfair tax proposals. They’re to be commended for their courage and wisdom. 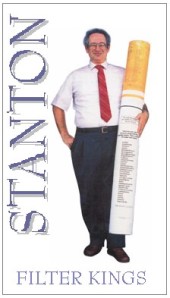 We specifically need the help of Californian non-smokers to defeat an insidious attempt by a particularly malicious college prof and his parasitic, minority-thrashing cohorts to rob four million of your fellow Californianos in broad daylight. The modus operandi is grand theft by ballot initiative. Prop 29 is advertised as a cancer research funding gesture to be paid for by levying a one dollar per pack tax on cigarettes. You should know that by cancer research they really mean endless Tobacco Prohibition research studies. If you’ve got a functional moral compass please read on. If you’re weary of those mood-killing antismoking public service announcements produced by the tax-supported TobaccoFreeCA ruining your television viewing time, do read on.

You need not smoke, nor turn in your progressive badge to vote against this wrongheaded ballot measure. It is an abuse of the citizens referendum process at best and mob rule at its worst. Tobacco taxes are inherently regressive, with the burden falling heavily on those least able to afford to pay. Please don’t go for the misnomer that the poorest smokers will all magically quit, it just doesn’t work that way. Besides that, the initiative’s authors are counting on people to continue to buy tobacco products. After all the State of California now becomes the lead smoking profiteer if this passes. 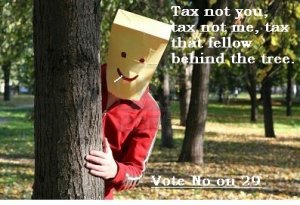 We’ve got to ask ourselves as a society whether we want to design our tax system to operate on a majority gang basis, with singled out disfavored minority cliques paying for everything. It may seem to be a veritable free lunch nirvana, but it’s ultimately no way to run a railroad. It’s the old game of “Tax not you, tax not me, tax that man behind the tree.”

It’s a game fraught with all sorts of mischievous possibilities. Pick your pet program, figure out which minority slice of the demographic pie is the most vulnerable, make some kind of altruistic argument, place it on the ballot and send them the bill. This is precisely what happened to smokers in California back in 1998 when Rob Reiner decided they alone should fund pre-school education despite there being no existent 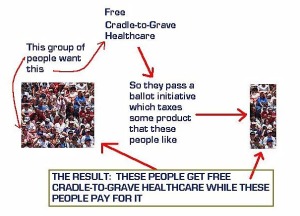 correlation whatsoever. His Prop 10 barely succeeded by less than one-percent. It was so close that the final result wasn’t known for a week after the vote.

Seeing as smokers represented about a quarter of the population at the time, it’s clear that quite a few honest non-smokers saw through the unfairness of the scheme. They were to be commended then as now, if we manage to defeat Prop 29.

Let’s suppose group A with an agenda decides to target Latino voters who comprise 30% of the electorate. Using the health and safety argument that tortillas contain loads of fat and cause diabetes, a 5-cent per unit tax might then be proposed. The funds could be dedicated to obesity research, which is a convenient current hot button issue. With 70-30 odds going into the fray, it’s certainly worth the signature gathering effort. A nickel each has that nice affordable, no-big-deal shine to it, but it constitutes $1.50 extra on a typical pack of 30. That doubles the price of this popular staple. We’re talking some big money here.

Cancer research benefits a wide spectrum of the population and a more equitable way of funding it would be to spread the contribution base as universally as possible, rather than isolating a demonized few to pick up the entire tab.

Do the right thing on June 5th, vote down Proposition 29.

smoker
View all posts by Frank Davis →
This entry was posted in Uncategorized and tagged 29. Bookmark the permalink.

42 Responses to Vote No on California Proposition 29