Occasionally I take a lot of interest in a news story. The buildings that collapsed in Rio de Janeiro’s historic centre last night prompted such interest, because I used to live in Rio many years ago, and my father worked about a quarter of a mile from the spot. I knew the area quite well.

I found an AP YouTube video that shows the moment of the collapse. The last girl running away must feel pretty lucky. 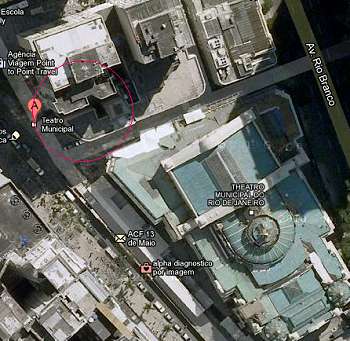 The buildings turned out to be on Avenida 13 de Maio, just north of Rio’s municipal theatre, a 19th century architectural extravagance. I’ve circled the 3 buildings that collapsed (right).

Using Google Maps, I tried to find a photo of the buildings before they fell down. This proved a bit difficult, because Avenida 13 de Maio is a pedestrian-only road, and Google’s camera trucks can’t drive up it. Also, while there were quite a few photos taken in the vicinity, they were all of the Theatro Municipal. The three fallen buildings looked for a while like they were going to be invisible. 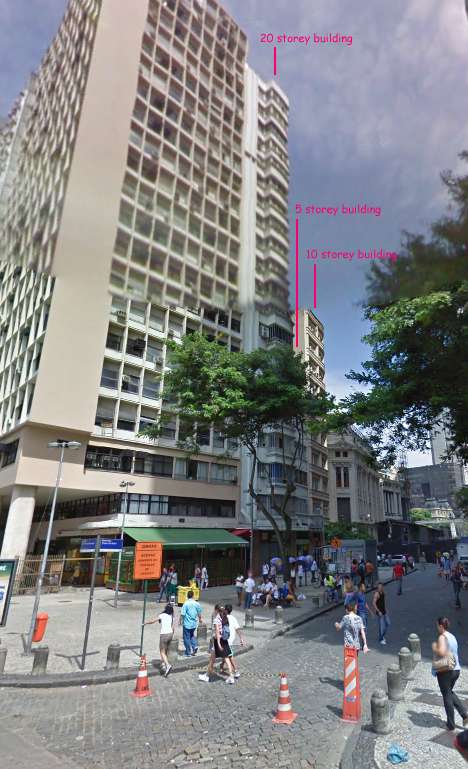 But eventually, using Google maps, I managed to get a shot of them looking south-east from Avenida Barroso along Avenida 13 de Maio (just off the top left of the satellite view).

None of the news coverage that I’ve seen has this photo.

I also found an AFP helicopter shot (at bottom right) that shows smoke and dust rising from the site.

Since it only happened last night, there may well 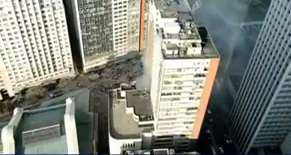 still be people trapped inside it. Although fortunately, it was an office building which collapsed at 8:30 pm at night, and had relatively few people working late there at the time.

Amazing how much you can find out in an hour or two.